The "Soft Bigotry" Of Slamming Obama-Rama 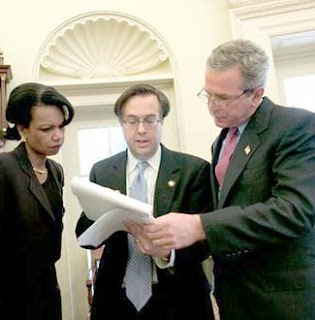 Be warned that, with the sudden resurgence of Hillary Clinton following her primary wins in Rhode Island, Ohio and Texas yesterday, our corporate media smells blood in the water emanating from the Barack Obama camp, and they’re not in the mood to snack on chum, if you know what I mean.

And one of the first to try and close in for the kill is Michael Gerson of The Washington Post here (center in photo, of course); the fact that the Post gives him space for his propaganda without reminding readers of his sordid role as one of the chief Bushco propagandists speaks volumes for the moral bankruptcy of the Beltway chattering class.

Might as well get to it (see, Gerson is speculating on Obama’s first 100 days as president in “glass half-empty” mode)…

Redeeming his inaugural pledge to "pay any price, bear any burden, fly any distance to meet with our enemies," Obama's first major international meeting is with President Mahmoud Ahmadinejad of Iran. National security adviser Samantha Power does her best to talk tough on human rights in preparation for the meeting. But, as Henry Kissinger once said, "When talks become their own objective, they are at the mercy of the party most prepared to break them off." Having made Iranian talks "without precondition" his major foreign policy goal, Obama is left with little leverage to extract concessions, and little choice but to move forward.

Funny, but if Gerson was looking for a quote from someone concerning negotiating with your enemies, you would think he’d check with “his childhood political hero Jimmy Carter” (noted here) instead of Henry “Salted Peanuts” Kissinger, one of the most notorious liars the world has ever seen.

The New York Post runs a front-page picture of the Obama-Ahmadinejad handshake under the headline "Surrender Summit!" The story notes another of Obama's historic firsts: the first American president to meet with a Holocaust denier.

Yeah, it’s a shame that Obama can only be the first president to meet with a Holocaust denier, isn’t it, especially since one of our former presidents has already paid homage to a location where actual Holocaust perpetrators are entombed (here).

America's moderate Arab allies in the region also feel betrayed, assuming that America is cutting a bilateral deal with Iran that accepts its nuclear ambitions, while leaving the Sunni powers out in the cold.

Assuming you could call Nouri al-Maliki of Iraq a “moderate Arab ally,” he has no grounds to complain about anyone cutting deals after this.

The Egyptian press notes that President Obama's motorcade in Tehran passed near a street named in honor of Khaled al-Islambouli, the assassin of President Anwar Sadat.

By the way, Islambouli was an Egyptian citizen; why the name of a street in Iraq is supposed to be Obama’s problem is something I can’t imagine (also, do you know that only 2 of the 24 states in the Arab league sent representatives to Sadat’s funeral? It’s a testament to Sadat’s courage that he took the initiative he did in the Camp David Accords knowing that practically all that would result is animosity in the Arab world).

Obama's 100-day agenda would be designed, in part, to improve America's global image. But there is something worse than being unpopular in the world -- and that is being a pleading, panting joke. By simultaneously embracing appeasement, protectionism and retreat, President Obama would manage to make Jimmy Carter look like Teddy Roosevelt.

Well, at least Obama wouldn’t look like George W. Bush, the recipient of Gerson’s attempts at image enhancement through his speeches (most notoriously, Dubya’s 2005 inaugural address). That’s bound to be an improvement over the status quo, documented in such depressing detail here.

However, as noted here, Gerson is an old hand at misrepresenting Obama (“a pleading, panting joke” indeed).
Posted by doomsy at 12:09 PM