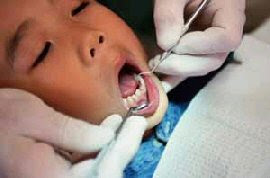 This is a local thing that doesn’t pertain to politics, but it’s a pet peeve of mine, so here goes.

The Bucks County Courier Times published this Guest Opinion yesterday from Dr. Brent Monahan (does not specify whether or not Monahan obtained his doctorate in dentistry) in which he argues that it is unnecessary to fluoridate all of Pennsylvania’s water supplies (currently the water for Lower Makefield and Yardley Borough in PA remains non-fluoridated). And (somewhat amazingly to me) he used this information to support his claim…

Untold billions of dollars in dental care have been saved by water supply fluoridation, since this procedure has been credited with lowering the occurrence of cavities by as much as 60 percent in children up to 16 years of age. Since mouth infections can be fatal, lives have also been saved by a technique that requires no extra time or application by the general public.

The crux of Monahan’s argument seems to be that most people in his experience and immediate community obtain all the fluoride they need from direct application of fluoride directly to their teeth at the dentist’s office during their regularly scheduled appointments, so it is unnecessary to fluoridate the water. And of course, since we’re talking about Bucks County, PA, which remains (on the whole) the “Republican land of God and guns,” Monahan ends his column with this…

For those lower socioeconomic communities where social work research has clearly demonstrated that insufficient brushing with fluoridated toothpaste and lack of regular professional dental care exist, the enforced introduction of fluoride into the water system is merited. Elsewhere, it is merely one more instance of governmental intrusion by the folks who believe that “government that intrudes the most works the best.”

Well, isn’t that special (and let’s all click the heels of our shoes together three times and say, “I hope I don’t lose my dental insurance coverage,” each time we do, OK?).

Guess what, Dr. “I Hate Governmental Intrusion”? Try reading this article, which states the following…

Tooth decay is making a comeback, fueled by junk food, spurred by social changes, and abetted by an unusual culprit - bottled water.

"I had a three-year-old kid come in the other day," says Toronto dentist Sheldon Rose, D.D.S., "and he had at least two cavities that I could see. I haven't seen that for years."

Like most dentists, Dr. Rose blames the usual suspects - snack foods, soft drinks, lack of parental supervision of food. But bottled water also plays a role, he and others suspect.

"It's not the water that's causing the decay," said Jack Cottrell, D.D.S., president of the Canadian Dental Association (CDA). "It's the lack of fluoride."

So it looks like even the people who load up the SUV or the min-van every weekend to head down to B.J.s and buy cases of bottled water are at risk of increased tooth decay without fluoridation also – wouldn’t you agree then, Dr. Monahan? It’s not merely a problem for “lower socioeconomic communities” then, is it (and this Wikipedia article provides more information).

Yep, I’d say there’s something rotten to Monahan’s claim all right, and you don’t have to look into anyone’s mouth to find it.
Posted by doomsy at 1:40 PM