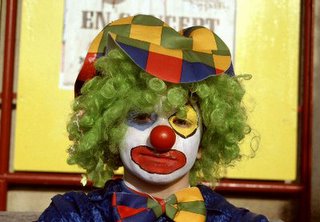 Fields wrote, “Because most of us demand a sense of humor to humanize presidents, unfunny things can pass for humor in Washington. That’s why presidents (with good script writers) go out of their way to laugh at themselves once or twice. George W. Bush entertained one press dinner a few years ago with a slide of himself looking under the furniture in the Oval Office, saying: ‘Those weapons of mass destruction have to be here somewhere’.”

I would pose a question to Fields: If she asked the loved ones of the American troops who died or were maimed for life in Iraq because of the nonexistent weapons of mass destruction, would those loved ones have more concern over Hillary’s cackle or Bush’s outrageous, completely insensitive attempt at humor? A pox on all the journalists who laughed at this disgraceful act.

Bush sure “humanized” himself with that, didn’t he, Suzanne?

The right is engaged in this utterly surreal dance where the morally blind are leading the ignorant.

I purposely stayed away from the whole business of “the laugh” because I’m trying to avoid that which is truly trivial in our discourse, even though I know I’ll fail on occasion. But as long as this has come up, I should note a great column by Gene Lyons on this (available from here from the Arkansas Democrat online – sorry, but I’m not paying for more online content...I think the column is dated 9/26, but I'm not positive).

Since I don’t have what Lyons said verbatim at the moment, I’ll just recall that the “the laugh” was something that came up when Hillary Clinton appeared on all five Sunday morning talk shows a couple of weeks ago (performing what has been called “a full Ginsburg” to commemorate the time Monica Whatsername attorney William Ginsburg did the same thing to defend his client, a young woman painted by right-wing media as a victim of a predatory chief executive (I’ll leave the irony in that up to your interpretation, by the way).

As Lyons tells us, the first person to take note of HRC’s laugh was Brit Hume of Faux TV, who considered it to be no big deal, believe it or not. However, sometime later that day, the RNC decided that “the laugh” was worthy of a GOP talking point, so the edict went out to all like-minded pols and media acolytes to say something (as always, the more derogatory, the better). And that is how another chapter of our ever-more-ridiculous-discourse in this country began.

Mark Twain, in “Pudd’nhead Wilson” said “the secret source of Humor itself is not joy but sorrow” because “Everything human is pathetic.”

Had Fields lived to write in Twain’s day, I have no doubt that he would have been referring to her.

Update: And in response to John's comment (this combination is worth more words than I can come up with at the moment)... 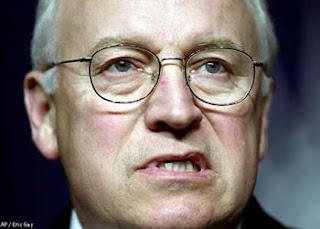 The right wing, forever a mile wide and an inch deep.

your cohort in Bensalem,
John

The right wing, forever a mile wide and an inch deep.


By the way, you should put that pic of Congressman Murphy next to the pic of Cheney. Let the world get a load of the contrast.

your cohort in Bensalem,
John

If a picture paints a thousand words...lalalalallalaa.

When I saw your picture I was immediately reminded of the British actor Patrick McGoohan.

I should clue you in on that one; you’re right, that’s Patrick McGoohan and not yours truly. I have a note on the home page stating “the reason why I have a photo of the actor Patrick McGoohan (from the '60s) included in my profile is because the characters he has portrayed often show a strict sense of self-determination and a moral code of sorts as well as an inherent loathing and mistrust of authority. I admire all of that (even though I definitely don't look like him), so this is my small tribute.”

(Of course, McGoohan also played the despicable King Edward “Longshanks” in “Braveheart” and a reprobate musician in the 1961 movie drama “All Night Long,” so my logic here may be flawed a bit.)

I may put my real photo out there some day – I’m still thinking about it.