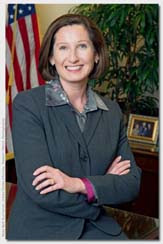 The WaPo tells us today that former PA governor Dick Thornburgh testified before the House Judiciary Committee that his client, Cyril Wecht (a coroner and high-profile western PA Democrat) was being singled out by U.S. Attorney Mary Beth Buchanan (pictured)…

"(Wecht) has always been a contentious, outspoken, highly critical and highly visible Democratic figure in western Pennsylvania," Thornburgh told the House Judiciary Committee. "In other words, he would qualify as an ideal target for a Republican U.S. attorney trying to curry favor with a department which demonstrated that if you play by its rules, you will advance."

Thornburgh also said that Wecht "was not the only apparent political prosecution in western Pennsylvania," pointing to three high-profile cases of other local Democrats brought by (Buchanan) of Pittsburgh.

And this tells us more about Buchanan’s penchant for self-promotion through prosecuting specious cases other attorneys wouldn’t touch, such as one in particular…

Critics blasted “Operation Pipe Dreams,” calling the nationwide sting on drug paraphernalia trafficking a waste of resources. Buchanan charged on, though, and in 2003 won a conviction against Tommy Chong — the Los Angeles actor made famous by the marijuana-laced “Cheech and Chong” movies.

The Justice Department and (former Attorney General John) Ashcroft praised both cases. Buchanan was rewarded with a string of lofty posts, one of which — director of the Executive Office for U.S. Attorneys — has landed her at the forefront of a congressional investigation into a group firing of fellow Republican prosecutors.

Buchanan was appointed U.S. attorney for Western Pennsylvania by President Bush in September 2001.

Her office has opened at least five investigations into prominent Democrats over the past five years. Critics say she has ignored allegations against fellow Republicans during that time.

Commenter Douglas also has additional information on Buchanan at this post, including an attempt by Buchanan to investigate Pittsburgh Mayor Bob O’Connor before he died.

Whether or not Thornburgh called out Buchanan only to represent a client or because he wanted to put the brakes on another scheming opportunist and inheritor of the “Gonzo” Gonzales DOJ, the former Reagan and Poppy Bush confidant should be credited here (which is shocking; I never envisioned a day when I would give Thornburgh credit for anything).

Update: And speaking of matters related to criminal justice, I give you this.
Posted by doomsy at 3:39 PM