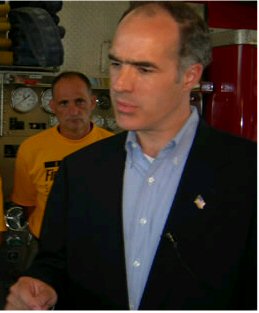 I’ve rightfully dumped on Sideshow Bob Casey for a little while now since I believe that he, like many other congressional Dems, has utterly failed us on the two most critical issues facing this country: namely, the FISA giveaway to Dubya (it would be nice if you supported Chris Dodd’s filibuster on immunity to the telecomms, Bob) and the Iraq war (though he did support the Webb amendment entitling our military to stays at home that matched the length of their deployments to Iraq).

Update: Speaking of Dodd, if you read nothing else online all day, or all month for that matter - read this!!.

However, I should note that Casey did vote here against the confirmation of Leslie Southwick to the Fifth Circuit, U.S. Court of Appeals. However, as was the case with the Webb Amendment, Casey did the right thing in a losing cause.

Here are the so-called “Democrats” who supported the Southwick confirmation…

So just as a reminder, what exactly is the problem with Southwick? Well, as noted here (I cleaned up some of the stray characters in the text)…

Leslie Southwick upheld the reinstatement with back pay of a white worker after she had been fired for using the single most offensive racial epithet, calling a black colleague a “good ole nigger.” In the wake of heightened racial sensitivity engendered by the Don Imus imbroglio, it is amazing that there is so little outrage over the unbelievably insensitive position taken by a nominee for a lifetime appointment to the federal bench.

In another case, he agreed that an eight-year-old girl could be taken away from her birth mother, in large part because the mother was living with another woman in “lesbian home.” Southwick went even further, joining a gratuitously anti-gay concurrence suggesting that he believes sexual orientation is a “choice” and that one legally acceptable consequence of that “choice” is losing one’s child.

This country’s proud history of jurisprudence took another big step backward with the Southwick confirmation, though Casey’s vote (which should have been a no-brainer for any member of a party that purports to represent us) is something of a baby step back to respectability for him.
Posted by doomsy at 9:54 AM

thanks for the nod...

i've only been screaming my head off about our constitutional crisis for a couple of years now and, quite honestly, i was beginning to think that nobody was going to step up... reading that speech of dodd's made my day... it'd sure be nice if a couple of million folks would get behind him, not necessarily as a candidate (my jury is still out on that one), but certainly behind the issue, arguably THE most critical issue that has ever faced our country...