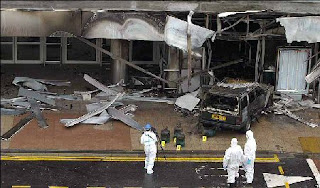 Aside from the fact that the terrorist threat level remains at “orange” from Mike (“City of Louisiana”) Chertoff and the DHS, where it has been for over a year (can we at least have a hint as to why?), I really don’t understand the point of this story (and I love the fact that it’s basically composed of quotes and paraphrasing from an interview Chertoff gave to Fox; is CNN now in the business of promoting News Corporation also?).

Here is a story from the Times of London about the two attempted car bombings in that city along with the crash at the Glasgow Airport terminal (and I thought this item at the very end of the story was interesting, but not surprising)…

Sources also denied a report from the US that America had warned British intelligence two weeks ago of a plot to attack Glasgow airport.

I suppose the Brits are referring to this; I don’t know if the issue is that the warnings came from previously-discredited sources but we didn’t realize that or that we didn’t think it was necessary to share the warnings with the UK “for operational reasons.”

(Here's more from Atrios/Josh Marshall.)
Posted by doomsy at 8:57 AM