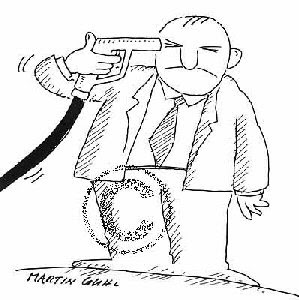 This story appeared in the Philadelphia Inquirer on Tuesday (I was going to point out that one spring tradition is the rise of gas prices prior to the summer travel season, but prices have been so high for so long that I can’t recall when gas was actually cheap…and why do I feel that, somehow, that’s exactly what Bushco wants?).

Gasoline at $4 Coming to a Pump Near You, Unfazed by Rising Tab

Fuel prices are rising at a pace not seen since Hurricanes Katrina and Rita knocked out a third of the U.S. oil refining industry in 2005. Gasoline consumption is climbing twice as fast as last year and will accelerate when summer travel begins late next month.

``What we're surprised by is the increased demand,'' said James Mulva, chief executive officer at ConocoPhillips, whose refineries from California to New Jersey produce 56 million gallons of gas a day, enough to meet 14 percent of the country's needs. ``Even though the price of gasoline is up, the demand is up,'' he said in an April 12 interview in Houston.

Population gains and U.S. economic growth are causing an increase in fuel purchases, according to Orlando, Florida-based AAA, the nation's largest organization for motorists. The U.S. economy will expand at a 2.4 percent annual pace in the second quarter, up from 1.8 percent in the first three months, according to the median estimate of 74 economists surveyed by Bloomberg. Gasoline use is rising almost 5 percent above the five-year average.

The economy will expand at 2.4 percent, huh? Wow.

Under the Clinton Administration (as noted here), the economy expanded at 4.0 percent a year.

Americans are resigned to higher prices, says David Pursell, a principal with Pickering Energy Partners, a consulting firm in Houston.

Really? If that’s true, then why, for example, is mass transit ridership up in Philadelphia while vehicular traffic dropped for the first time in 50 years?

``Last year, we had pump prices well over $3 for the summer and gasoline demand was up,'' Pursell said in an interview. ``Would $4 gasoline cause demand contraction? I think it will, but I also thought $3 gasoline would.''

Gasoline inventories, measured by the days of demand they will cover, are at the lowest level in two decades for this time of year because of refinery fires, power failures and maintenance work oil companies failed to complete in 2006. No new U.S. refinery has been built in three decades, increasing the strain on existing plants.

Do you think another factor here is that oil companies may have deliberately produced below capacity to maintain profitability (see the quote from Jamie Court in “Shot Across The Bow” here).

Pump prices in the U.S. may increase to $4 a gallon from a nationwide average of $2.87 today, especially if hurricanes threaten Gulf of Mexico refineries, says Peter Beutel, an analyst at Cameron Hanover Inc. in Stamford, Connecticut, who helps industrial consumers manage energy costs.

Here’s another factor involving gas prices: world instability, particularly in Iraq, Iran, and Venezuela. An increase in tensions in that area of the world automatically jacks up the price of petroleum (and though I know Dubya isn’t solely to blame here, his total inability to approach those issues diplomatically have resulted in increased costs at the pump).

The June-to-November Atlantic Ocean hurricane season may produce 17 tropical storms, with nine reaching hurricane force and four becoming major hurricanes whose winds exceed 111 miles per hour (179 kilometers per hour), London-based forecasters at Tropical Storm Risk said. Some of the storms will strike the Gulf Coast this year after a benign 2006, AccuWeather.com predicted.

Higher pump prices will make winners of refinery owners such as ConocoPhillips, San Antonio-based Valero Energy Corp. and Royal Dutch Shell Plc of The Hague. Shares of Valero and Sunoco Inc., whose only business is refining, are rebounding after a decline at the end of last summer.

The increase in fuel costs threatens to quicken inflation and restrain consumer spending in the U.S. An appreciation to $4 a gallon would add more than $10 for a driver who fills the 12- gallon tank of a Toyota Motor Corp. Prius. The owner of an Expedition, a Ford Motor Co. sport-utility vehicle with a 34- gallon capacity, faces an increase of almost $40.

Many Americans have no choice but to drive more, says Christopher Knittel, an economist who studies fuel consumption at the University of California in Davis.

``We live farther from our jobs than we did in the 1970s, and with the rise of dual-income households, we now have two people who drive those distances every day,'' Knittel said.

Consumers also do more driving for things such as taking children to soccer practice, which they are unlikely to quit, he said. The U.S. population has increased 1 percent a year in the past decade to 301 million in 2007, adding to demand for gasoline, economists said.

Rising fuel prices make it less likely that Federal Reserve policy makers, who have cited inflation risks for the past year, will cut interest rates to spur economic growth. Before the hurricane-induced peak in 2005, U.S. gasoline topped out at $1.42 a gallon in March 1981, or $3.21 when adjusted for inflation, according to the Energy Department.

Economies in Europe and Asia are less likely to be hurt by gasoline prices because fuel already is subject to high taxes designed to encourage conservation. A gallon of unleaded costs about 3.25 pounds a gallon ($6.49) in the U.K., and in Japan it's 130.3 yen per liter ($4.16 a gallon).

U.S. consumers will get little relief on gasoline prices from Europe this year, unlike 2005, when oil companies shipped more across the Atlantic after the hurricanes. Europe's gasoline inventories in February were 114.2 million barrels, down 11 percent from two years earlier, according to the International Energy Agency in Paris. The drop in Europe was almost twice the 5.7 percent decline in U.S. supplies in that time.

``Just as we used to think $3 a gallon was an impenetrable barrier, now it's $4,'' said Peter Morici, a professor at the University of Maryland School of Business in College Park and former chief economist for the U.S. International Trade Commission. Gasoline at $3.50 is likely, Morici said, and a conflict with Iran or any event that disrupts crude supplies may push it to $4.

Pump prices rose 33 percent in the past 11 weeks, the fastest rate of gain since a six-week, 34 percent rally to the record $3.069 in September 2005, Energy Department data show.

U.S. Energy Secretary Samuel Bodman in an interview last week said the national average pump price could break the record this summer. While his agency's official forecast is for gasoline to peak next month at about where it is today, hurricanes, refinery closures or crude oil supply cuts may send prices higher, he said.

Higher prices are ``a legitimate worry,'' Bodman said. ``We have trouble spots all over the world'' that could boost crude oil prices. ``We're in a very tight situation.''

Spending on fuel in the U.S. consumes half as much household income as in the early 1980s, which means gasoline would need to reach almost $6 a gallon to have the same effect on the economy as in 1981, according to the Federal Reserve Bank of Dallas.

I don’t know what the hell that sentence means in terms of my overall spending and income, but I tell you this: if we ever see gas at $6 a gallon, I will either a) telecommute for the rest of my life, or b) try and buy a horse.

Storage tanks at U.S. refineries, terminals and ports hold enough gasoline to cover almost 22 days of domestic demand, 8.2 percent less than the five-year average and the lowest for this time of year since the 1980s, Energy Department figures show.

Valero-owned filling stations in Denver and Colorado Springs, Colorado, ran dry after a Feb. 16 explosion and fire shut the company's McKee refinery in Sunray, Texas. A day earlier, a blaze at an Exxon Mobil Corp. plant in Nanticoke, Ontario, slashed output, resulting in shortages and higher prices across eastern Canada.
The McKee shutdown strained supplies so much that ConocoPhillips postponed maintenance at its Borger, Texas, refinery north of Amarillo to prevent shortages in the region.

``What we're finding is it's more difficult keeping reliability up with more sophisticated pieces of equipment that are highly integrated.''

Tesoro Corp. of San Antonio, the second-largest refiner in the western U.S., said first-quarter refinery use dropped because oil companies delayed until this year maintenance that could have been done in 2006. The portion of U.S. refining capacity that was in operation in the first quarter declined to 87.3 percent from 88.9 percent a year earlier, according to Energy Department data.

``Prices will depend entirely on whether we have a couple of refineries blow up,'' said Philip K. Verleger, an economist who runs a consulting firm in Newport Beach, California. ``It's almost impossible we'll get to $4 a gallon if all the refineries run well this summer. But if something happens and there are problems, then anything's possible.''

The average share gain for Valero, Tesoro and six other oil-refining companies is 26 percent this year, outperforming the 4.1 percent gain for Exxon Mobil and a 4.7 percent increase for the Standard & Poor's 500 index.

``Refiners are doing very well these days,'' said Carlson, whose holdings include ConocoPhillips, the second-biggest U.S. refiner. ``There will be lots of demand for any new refining stocks.''

As recently as August, investors were selling oil refiners on concern an economic slowdown would slash fuel demand in the U.S., the world's largest energy market. During seven weeks last August and September, Valero shares fell 29 percent, wiping out $12 billion in market value.

``Refining is very much back in favor,'' said Douglas Ober, who helps oversee $2.3 billion at Baltimore-based Adams Express Co. ``Even with higher prices, we haven't seen any substantial cutback in demand. They're cranking out as much of this stuff as they can, and we're throwing it in our tanks as fast as we can.''

The margin earned from processing crude oil into fuels rose to $24.68 a barrel on April 11, the highest since right after the hurricanes in September 2005. The margin has since retreated to $22.12 a barrel, still about double the five-year average.

``It'll be a fairly tight gasoline market all through the summer,'' said Robert Hinckley, an analyst at Rochdale Securities in New York.

As I read this article, I couldn’t understand why the oil companies, altruistic corporate citizens all, somehow managed to be struggling with the cost of upgrading their refineries and even trying to build new ones (partly for ethanol conversion), especially given their obscene profits (as noted here, for example).

All I know is that I'm paying just about $3 a gallon now for regular at the Shell down the street, and instead of "reporting" on this like it's the cost of doing business, I'd like to see a reporter try and earn his or her keep by looking at this issue in its totality for a change.
Posted by doomsy at 8:32 PM

Still too damn much...