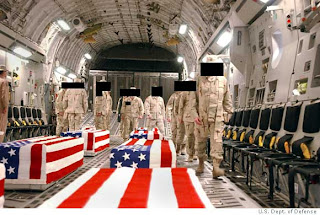 The latest from John Edwards...

Are you ready to end this war? Then it's time to act.

In the last 48 hours both houses of Congress passed a bill to end the war by funding the troops with a clear timeline to bring them home. Bush's inevitable veto will probably happen in less than 4 days.

Everything depends on what Congress does next. Many in Washington think it's time to give in. We made our point, they argue, and now we should just give Bush another blank check to extend his war.

No. This Congress was not elected to make points—it was elected to end the war. When Bush vetoes, Congress must pass another spending bill just like this one, that funds the troops and brings them home. And they should do it again. And again. Until we end this war.

We are not spectators in all of this. Our voice has real power. Please use yours today:

What are we up against here? You've seen it already.

How many times have you already heard things like "Democrats are the party of surrender" or "Democrats want to wave the white flag" from right-wing talking heads?

This is the classic Rove/Bush strategy: Pump the airwaves so full of frightening spin that the Democrats second guess themselves into paralysis and give up.

We will not be intimidated because we see what's behind every empty, chest-thumping right-wing talking point. We see another soldier who will never again leave his wheelchair. We see another American family stricken with grief. And we see hundreds of thousands of our men and women in uniform waking up every morning wondering if their family will be the next to lose someone they love.

Please add your name and comments today, and we'll make sure you are heard in Washington at this critical time.

Thank you for taking action when your country needs you most.

To learn more, click here.
Posted by doomsy at 2:11 PM