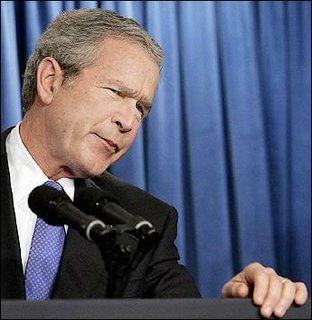 After I saw this at HuffPo (I did a screen grab of the headline because it was so far beyond belief), I suddenly realized why Bushco doesn't want to print the word "hunger" in any government correspondence about poverty and malnutrition.

As also noted here, Dubya is trying to start a library based on his alleged scholarly influence from the writings of Alexis de Tocqueville. Well then, he should recognize the following quote from his supposed mentor:

America is great because she is good, and if America ever ceases to be good, America will cease to be great.

Read some more de Tocqueville, Dubya, since you apparently omitted a few chapters in your study (and probably some Victor Hugo while you're at it, especially pertaining to Jean Valjean).
Posted by doomsy at 8:48 PM

Well then, I guess these guys were wrong too.

Just to update...my comment text didn't "wrap" properly, so if anyone wants to search, just add "great_because_she_is_good-if" to the full search URL.

Yes, these guys were wrong, too. If you want the actual full text of Democracy in America (Reeve translation), see: http://xroads.virginia.edu/~HYPER/DETOC/toc_indx.html. You will not find the purported quotation anywhere in the book or anywhere else in Tocqueville's writings.

Sorry to pile on, but Lincoln did not utter the "sin by silence" quotation that you attribute to him. See: http://www.illinoishistory.gov/facsimiles.htm