"Love And Kisses" To Yoo, Too 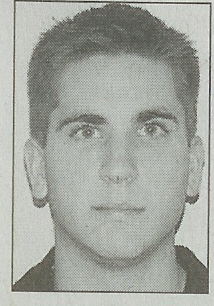 This all-timer of a Guest Opinion appeared in the Bucks County Courier Times yesterday from Mike Borek of Langhorne (pictured), a student at Penn State majoring in history and business.

I was in Center City recently and witnessed a disturbing display of anti-Americanism by a radical group called WorldCantWait.org. Members of this organization include all types of liberal activists, including Cindy Sheehan and Jane Fonda, and intellectuals (I use that term loosely) like MIT professor Noam Chomsky and historian Howard Zinn, author of the America bashing “People’s History of the United States.” Other assorted America-haters associated with WCW are disgraced Congresswoman Cynthia McKinney, convicted cop-killer Mumia Abu Jamal, and University of Colorado Professor Ward Churchill who called the 9/11 victims “little Eichmanns” after notorious Nazi war criminal Adolf Eichmann.

This extremist group placed tombstones outside Independence Hall with the names and photos of soldiers killed in Iraq, despite the opposition from hundreds of family members who explicitly asked them not to exploit the memory of their sons and daughters. After hearing one of the speakers rant for a couple minutes (sic), I talked with some of the organizers, many of whom were ardent Communists, and absolutely not shy about admitting their hatred for this country.

I wondered whether I was still in the United States, or if I took a wrong turn somewhere and ended up in Bizarro World, where up is down, black is white, and good is bad. Apparently killing terrorists responsible for 9/11 is offensive, but applauding a rap song encouraging Palestinians to kill Jews is acceptable.

This protest was not about peace. It was about showing hatred toward this country.

The extremism of this fringe group was even more profound when contrasted with the regular Americans counter-protesting across the street. These people held signs that showed support for the troops and waved big American flags that were notably absent from World Can’t Wait’s freak show (I’m assuming they had already burned theirs). As I talked to one of these counter-protesters, he informed me that his son was serving in Iraq and it made him sick to see such rampant Anti-Americanism in this country.

WorldCantWait.org is a dangerous and poisonous organization. Our newly elected Congress will come with some unfortunate baggage as powerful Democratic members like John Conyers, Maxine Waters, Major Owens, John Dingle (sic), and Nancy Pelosi have shown support for this pathetic group. Regular Americans should take note and resist this type of insanity.

While writing this I was reminded of a quote from former Vice President Spiro Agnew who spoke at West Point in 1970. I find it relevant in light of the blatant disrespect too often shown to our military. Agnew said, “Some glamorize the criminal misfits of society while our best men die in Asian rice paddies to preserve the freedom which most of those misfits abuse.”

I’m going to try and address the snark of Borek’s column, but I can guarantee you that I’ll miss some points (and by the way, if Ward Churchill were actually as important as the freepers make him out to be, he would be President of the United States).

Borek’s intention plainly is to tar as many Democrats/liberals/progressives as possible in the space provided to him by the Courier Times, designating them as “America haters,” “America bashers,” or whatever freeper parlance is acceptable at the moment.

If he had stuck to an account strictly of what transpired at the protest and nothing more, I would not be able to argue with him because I wasn’t there (though I suspect such an account would be hopelessly biased against WorldCantWait.org). However, he doesn’t bother to tell us approximately how many protesters were in attendance or communicate what kind of dialogue he may have had with them, but only to describe the college students as “grossly misguided” and veterans as “tokens” with “old army fatigues and ripped jeans.”

Also, it is beyond laughable to point out to a college student who is allegedly a history major that there is absolutely nothing wrong with a Communist Party affiliation in this country in the year 2006. It likewise is a “laff riot” to hear him quote convicted felon Spiro Agnew as a source of guidance (and who exactly was it who sent our best men to those Asian rice paddies anyway?).

Let me just digress and point out that the reason for the World Can’t Wait protest in Philadelphia is because it was a response to a visit from John Yoo. As noted from this link…

John Yoo is the main legal architect behind Bush’s response to the “War on Terrorism;” an unapologetic lawyer calling for unfettered executive power which has translated into the infringement on civil liberties in the name of national security. This fairly young attorney has made his career on re-defining and justifying torture, spying, detention, Gitmo, and the Patriot Act.

If you want to read more about John Yoo and make up your own mind, here’s some more information.

And besides, the last I read, it was still permissible in this county to assemble in a somewhat peaceable fashion to protest, especially in these times (I wish there was more of it and that I could personally participate in it, to tell you the truth, but I do what I can do).

I’m not too familiar with this organization, but as I learn more about them I find that I have common cause with them to a point (actually, Borek is going to have to line up behind me to protest Mumia Abu Jamal – as far as I’m concerned, it is an obscenity that he still lives).

So because of Borek’s screaming, bilious rant, I just took action in my own way and added a link to the group’s site in the right nav column. And I wish them luck.
Posted by doomsy at 1:27 PM