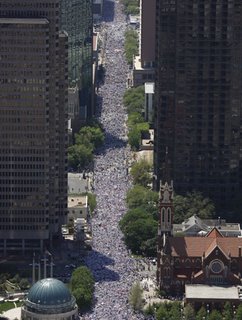 (Translation: Who is confronting the problems?)

(Speaking of problems, I'm having tons of them again with connectivity today: doing my best to work it all out...)

We know about the demonstrations by those in support of rights for illegal (or “undocumented”…to me there’s no difference) workers held across the country recently. This, to me, is the logical consequence of employers consistently providing employment to people without obeying labor laws and practices.

I mean, these people are here and making their presence felt loud and clear. Those here legally are screaming that the illegals don’t represent them (such as Mel Martinez, that model of civic responsibility). But the illegals are standing up for themselves and, in a quite literal way, fighting for their lives. And to measure their impact, consider that approximately 90 percent of the container traffic processed through the Port of Long Beach in California was disrupted yesterday. That’s a staggering number.

(Note: I haven't been able to find a link to that Long Beach item online, but I heard it on NPR this morning.)

I don’t have that much to add to this, to be honest, but I’ll try to provide some more background that I think is interesting.

To begin, I think employers in this country who hire the illegals should acquaint themselves with the Fair Labor Standards Act (which Dubya and the Repugs amended in August 2004 to screw white collar workers out of overtime pay). Next, this link takes you to a transcript of testimony from a man named Matthew Reindl of Great Neck, N.Y., a small business owner who testified before the U.S. House Judiciary Subcommittee on Immigration, Border Security and Claims about a year ago concerning the effect of illegal immigrants (his remarks are thorough and very enlightening).

Also, concerning the illegals themselves, what of those who aspire for citizenship? What of those who wish to show their patriotism (and yes, they can still feel that way as far as I’m concerned even though they’re breaking the law…maybe if Vicente Fox in Mexico would actually deliver the jobs he promised, as Jorge Ramos of Univision pointed out a few weeks ago on “Real Time,” then that might stem the flood into this country somewhat).

Well, we know about “Nuestro Himno'” the Spanish version of the National Anthem that was recently promoted by British music producer Adam Kidron (and we also know that Bush panned it…leave it to him to get it wrong), but did you know that a Spanish version of “The Star-Spangled Banner” was written already in 1919?

(I included the Inquirer link because it contains the English translation, which I think is beautiful.)

You can also read from this link to Atrios, by the way, about how Bush, even though he decried the Spanish version recently, sang it anyway while campaigning in the past (almost too pathetic for words).

To me, the bottom line is that the illegal/undocumented workers aren’t going to go anywhere and we’d better figure out some way to make them legal eventually or else they’ll flex their newfound muscle again and cause a devastating impact to our economy (you can’t know how ironic it is that your humble narrator feels this way, by the way, since my profession has been severely affected by offshoring, but we have to face reality).

We can continue to listen to demagogues like Tom Tancredo and try to ship the illegals all out of here and watch the economic impact, or we can come up with something better than Dubya’s “Guest Worker” program, ever mindful of the fact that this problem was created by lawbreaking businesses who turned their backs on the workers already here (Oh, but everything changed after 9/11, didn’t it? Please…) so they could turn a quick buck.
Posted by doomsy at 10:54 AM