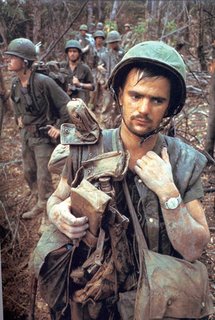 So now it sounds like the next big information technology stomping ground for the Fortune 500 crowd will be Vietnam. Could offshoring of jobs from India and China be far behind?

Good. Let them get a taste of our reality for a change.

The one thing that always gets me about stories of corporations seeking expansion overseas into countries that are just now approaching some level of industrialization (Vietnam) or countries that, basically at this point, are new superpowers (China) is that there is an implied benevolence in the story along the lines of “we’re sharing the wealth (supposedly) at these places out of the goodness of our corporate hearts, and look how everyone’s lives will be improved.”

There is never even a token acknowledgement any more in these stories of human rights abuses that may be going on in China and Vietnam, among other places (which is just ducky for Bushco, of course, since, as I pointed out Wednesday – “down time” yesterday for yours truly to take care of some other things – we’re not even going to seek a seat on the newly-reforming U.N. Human Rights Commission). It would be nice if Mr. Gates and his fellow captains of industry would at least make a passing reference to these circumstances or attempt reforms however they can, since, you know, this country is supposed to be about peace and freedom and democracy first and foremost…you know, the stuff we learned in school.

I realize that we can’t keep our heads in the sand and ignore the progress in these countries, which is, to some degree, a good thing. But we should at least speak to ideals of self-governance and free expression, especially in a country where we once fought a brutal, divisive war that scarred a generation of Americans and Asians alike.
Posted by doomsy at 8:50 AM

The across-the-board, Democrat and Republican, shameless, craven groveling in Viet Nam and China is a thoroughly fetid and vile betrayal of avowed American principles, or ANY decent principles. The Highland people, the Montagnards, are being exterminated as a culture(see Montagnard-Foundation.org) yet American university professors line up and salivate over consultant positions to market Viet Namese coffee, grown on land stolen from the Montagnards. Have these people no shame at all? Please people, don't go silently into the night. Write, call, scream at your elected officials, or be complicit in cultural genocide. Might be your only opportunity to get in line with an NRA member.