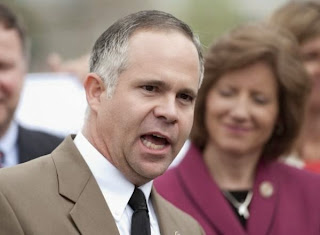 What a prize this guy is, if I do say so…

As far as Huelskamp is concerned, you’re not allowed to discuss gun control (particularly in the aftermath of the Sandy Hook carnage) because you would be advocating a “political agenda” (here).

He also said here that he would file a constitutional amendment to try and restore DOMA, despite the fact that it was overruled by John Roberts and The Supremes (but just remember, it’s “jobs, jobs, jobs” as far as Huelskamp, Cantor and Boehner are concerned). And in keeping with that, he spread more BS here about how kids supposedly do better in dysfunctional hetero families than functional same-sex ones (to the point where even Fluffyhead called him on it).

Basically, Huelskamp is such a Teahadist not job unwilling to compromise that he’s been removed by fellow Republicans from committee assignments (voted against the Violence Against Women Act, also voted against Sandy relief – of course…here).

But how do his constituents feel, I wonder…

“We hear criticisms that [Huelskamp] won’t get along, but that’s not what we elected him for. We elected him to vote for principle,” said Paula Carr, a 64-year-old who sells and repairs lawn and garden equipment. “Compromise is why we’re in the condition we’re in now — too much compromise over the last 30 years.’’

With all due respect to Ms. Carr, the main reason for the “too much comprise” over the last 30 years is because you’ve had the proverbial rug pulled out from under you by Republican politicians selling you “values voter” snake oil while income inequality has gotten worse and worse and worse. And at the risk of sounding like a snotty liberal, I should point out that it was up to you to overcome what I’m sure is your longstanding dislike of people with my political opinion and study the issues that truly matter with an open mind. And apparently, you failed to do so, to the point where you have sent a numbskull like Huelskamp to Washington, where he can do damage not just to your district but the whole country (and that quote means that you’re just as oblivious to that now as before).

Oh, and don’t count on Huelskamp to help with immigration reform either, since he thinks that appealing to Hispanics is “very discouraging” (here).

Update 1/29/14: Yep, Huelskamp is just another “one trick pony” – when all else fails, just attack that gol-danged “li-bu-ruul media” (here - and as far as BENGHAZI! is concerned, as I’ve said at least half a dozen times, I don’t recall any outcry at all when our ambassador David Foy was murdered in Pakistan in 2006).
Posted by doomsy at 3:13 PM