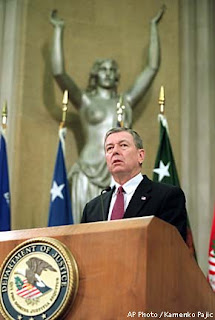 Call it “The Tit That Will Never Die – The Sequel” (here)…

WASHINGTON (AFP) – The US government has asked the Supreme Court to reimpose a half-million-dollar fine slapped on CBS television for a 2004 broadcast of live images of pop star Janet Jackson's breast, court documents obtained by AFP show.

It is up to the Supreme Court to decide whether it will consider the request.

The story tells us that this utter joke of a case was wisely thrown out by a Philadelphia federal court in July; the ruling was that CBS could not be held responsible for Janet Jackson’s actions (and those of Justin Timberlake also, of course).

(How much do you want to bet that the court of “Hangin’ Judge J.R.” will decide to hear the Super Bowl thing anyway, just to make headlines?)
Posted by doomsy at 11:40 AM