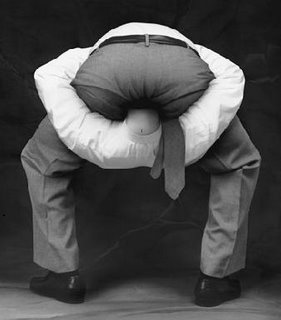 On Friday in Indiana, Obama talked tough in response to a question: “I get pretty fed up with people questioning my patriotism.” And, he continued, “I am happy to have that debate with them any place, anytime.” He’s happy to have fantasy debates with unnamed people who are allegedly challenging his patriotism. But he’s not willing to have a real debate with the real person he’s competing against for the nomination.

From here, dated last February (God, this was easy)…

But Obama chose to present his flag-pin removal as a principled gesture. "You know, the truth is that right after 9/11, I had a pin. Shortly after 9/11, particularly because as we’re talking about the Iraq war, that became a substitute for I think true patriotism, which is speaking out on issues that are of importance to our national security, I decided I won’t wear that pin on my chest."

Leave aside the claim that "speaking out on issues" constitutes true patriotism. What’s striking is that Obama couldn’t resist a grandiose explanation. Obama’s unnecessary and imprudent statement impugns the sincerity or intelligence of those vulgar sorts who still choose to wear a flag pin. But moral vanity prevailed. He wanted to explain that he was too good — too patriotic! — to wear a flag pin on his chest.

See, Bill, there’s this thing called “Google” which you can use to search for topics and find out just how many times you’re lying when you concoct this dreck for all to see.

Our “liberal media,” ladies and gentlemen…
Posted by doomsy at 10:39 AM