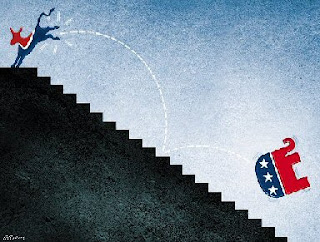 I really need to let everyone in on a hilarious new narrative emerging in the U.S. House 8th district contest between incumbent Dem Patrick Murphy and Repug challenger Tom Manion, and it is that, somehow, Patrick is “out of touch” with Bucks County because he supported Barack Obama, who was creamed in Bucks by Hillary Clinton last Tuesday.

Just to repeat, Clinton’s triumph was owed more than anything else to Dem machine politics which worked in a state with a population that skews older versus that of the rest of the country, though as I’ve said several times from a Daily Kos post noting a poll taken right after the vote, Obama gained ground among whites 60 and older (men and women voters), those earning less than $50K, and Protestants between the Ohio and PA primaries.

But those inconvenient facts aren’t stopping the Repugs from doing their little happy dance since the guy Patrick backed lost big time in Bucks (haven’t seen district-wide numbers, though), as typified in this clueless letter.

I think those engaging in premature celebration would do well to remember that, for the first time, registered Democrats have overtaken registered Republicans in Bucks (as noted here), to say nothing of the entire state, and the unhappiness that has led people to do that isn’t likely to be lessened over the loss of one Dem versus another in the primary (there may be some defections to McCain in the general election, but I think that will largely constitute people who would have done that anyway in response to Flush Limbore’s little game for which he was called out by Diane Marseglia here).

If this is a legitimate “issue” for the Repugs in the 8th district contest, then the biggest challenge we may have is fighting overconfidence (besides, if you’re going to talk about politicians tethered to unpopular presidential candidates, I’ll take Patrick’s endorsement of Obama versus the affiliation of the characters in the pic below; one is out, one remains, and one has about 266 days left). 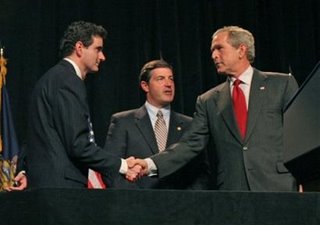 And by the way, to help Patrick, click here.
Posted by doomsy at 9:01 AM