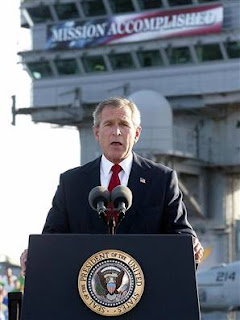 Greg Mitchell of E&P informs us of the 5-year anniversary of Dubya’s “Mission Accomplished” moment on the deck of the U.S.S. Abraham Lincoln, my vote for the stupidest and most insulting photo-op of all time (just remember that nobody got killed while former MA governor and one-time presidential candidate Michael Dukakis rode around in the tank, OK?). Here is more in recognition of this day from Democracy Arsenal (as well as this from BarbinMD at The Daily Kos; "the anniversary of when that banner flew on that ship," Dana? That sure wasn't how it sounded when your boss was crowing about it to everyone who had to listen to him).

Also, here’s a post from Adam Blickstein at D.A. which tells us…

"[al Qaeda] has reconstituted some of its pre-9/11 operational capabilities through the exploitation of Pakistan's Federally Administered Tribal Areas, replacement of captured or killed operational lieutenants, and the restoration of some central control by its top leadership, in particular Ayman al-Zawahiri," (a State Department report) says.

Blickstein also wonders what the new CENTCOM commander thinks of this report, but I think I can provide an answer based on this post, which states…

By the time (Admiral William) Fallon took command of CENTCOM in March (’07), Pakistan had become the main safe haven for Osama bin Laden's al Qaeda to plan and carry out its worldwide operations, as well as being an extremely unstable state with both nuclear weapons and the world's largest population of Islamic extremists.

Plans for continued high troop levels in Iraq would leave no troops available for other contingencies in the region.

Fallon was reported by the New York Times to have been determined to achieve results "as soon as possible". The notion of a long war, in contrast, seemed to connote an extended conflict in which Iraq was but a chapter.

During the summer (of ’07), according to the Post Sep. 9 report, Fallon began to develop his own plans for redefine the U.S. mission in Iraq, including a plan for withdrawal of three-quarters of the U.S. troop strength by the end of 2009.

The conflict between Fallon and (Gen. David) Petraeus over Iraq came to a head in early September. According to the Post story, Fallon expressed views on Iraq that were sharply at odds with those of Petraeus in a three-way conversation with Bush on Iraq the previous weekend. Petraeus argued for keeping as many troops in Iraq for as long as possible to cement any security progress, but Fallon argued that a strategic withdrawal from Iraq was necessary to have sufficient forces to deal with other potential threats in the region.

Fallon's presentation to Bush of the case against Petraeus's recommendation for keeping troop levels in Iraq at the highest possible level just before Petraeus was to go public with his recommendations was another sign that Petraeus's role as chief spokesperson for the surge policy has created a deep rift between him and the nation's highest military leaders. Bush presumably would not have chosen to invite an opponent of the surge policy to make such a presentation without lobbying by the top brass.

Fallon had a "visceral distaste" for what he regarded as Petraeus's sycophantic behaviour in general, which had deeper institutional roots, according to a military source familiar with his thinking.

I think we pretty much knew that Fallon was pushed out already in favor of The Almighty Petraeus, but that kind of puts added emphasis on the matter (it also drums home the fact that Petraeus has no intention of doing anything to shift our focus from Iraq to the Afghan/Pakistan border where it belongs – and speaking of Afghanistan, I’ve been trying to come up with a reason to link to this great post from profmarcus over the weekend, and I think this is as good of an opportunity as any…waaay too much to ask of our professional journos - like Brian Williams - to do anything close to this kind of quality work, apparently...the Inky called Afghanistan "a promising road full of potholes" here - WHAAAA????!!!).

And by the way (getting back to the “Mission Accomplished” thing), here’s the latest attempt to spin that blunder in favor of the administration from our ruling cabal of liars.
Posted by doomsy at 11:18 AM