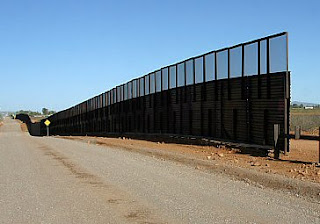 The New York Times says it very well (from here)...

To the long list of things the Bush adminis- tration is willing to trash in its rush to appease immigration hard-liners, you can now add dozens of important environmental laws and hundreds of thousands of acres of fragile habitat on the southern border.

On Tuesday, Michael Chertoff, the secretary of homeland security, waived the Endangered Species Act, the Clean Water Act and other environmental protections to allow the government to finish building 700 or so miles of border fence by year’s end without undertaking legally mandated reviews of the consequences for threatened wildlife and their habitats.

Will this stop or slow illegal immigration? No. Long experience has shown that billions of barricade-building dollars will simply shift some of the flow to more remote parts of the 2,000-mile southern border. And no amount of border fence will keep out the 40 percent of illegal immigrants who enter legally then stay too long.

It will be a disaster on the ground. One example of what’s at risk is the Lower Rio Grande Valley National Wildlife Refuge. It runs in checkerboard fashion along the 200 miles of the Rio Grande before it empties into the Gulf of Mexico. When the fence is finished, most of the refuge’s 95,000 acres — and the ocelots, jaguarundis and other rare species that live there — would wind up on the side of the fence closest to Mexico, virtually impossible to monitor and protect. Other sensitive areas in California, Arizona, New Mexico and Texas would also be affected.

Though environmental groups are planning to go to court to stop the Chertoff plan, a surer remedy lies on Capitol Hill. Congress created this mess by giving the secretary waiver authority in 2005. Then, in December, it gave itself an out, requiring that before the Department of Homeland Security receives any funds, the secretary must show that he has properly consulted with local officials and landowners. He must also provide a detailed justification for each separate segment of the fence.

To prevent an environmental disaster, Congress should use that oversight power to block the project, then move rapidly to rewrite a fundamentally bad law.

And by the way, if you’re wondering how Chertoff was able to skirt 36 federal laws while constructing this portion of his fence, you need to follow the odious trail back to the happily-long-gone 109th Congress.

Section 102 of the Real ID Act (the “fundamentally bad law,” so correctly termed by the Times) states as follows…

Amends the Illegal Immigration Reform and Immigrant Responsibility Act of 1996 (IIRIRA) to authorize the Secretary of Homeland Security (the Secretary), in the Secretary's sole discretion, to waive all laws as necessary to ensure expeditious construction of certain barriers and roads at the U.S. border. Prohibits courts, administrative agencies, and other entities from reviewing the Secretary's decision or from ordering relief for damages alleged to have resulted from such decision.

And as a result, Chertoff will now try to build his “fence” which won’t do a damn thing to keep out illegal immigrants, but it will create an ecological disaster, as the Times states.

Here’s a link to contact your House Rep and Senator to tell them to put a halt to Chertoff’s monstrosity. And if anyone reading this lives in Wisconsin, ask yourself why you would even imagine voting for Sensenbrenner again this fall.
Posted by doomsy at 11:05 AM