Not The "Right" Type Of Bucks County Voter? 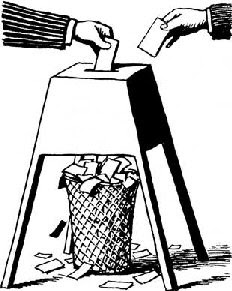 For more than 30 years (voters at the Creekside Apartments in Bensalem, PA voted at a site in their apartment complex). The site was moved last year after two letter writers, citing crime at the sprawling complex, expressed safety and parking concerns.

As a result, many Creekside voters stayed home on Election Day (last year). This was a shameful development, because most Creekside residents are naturalized Americans who worked hard to become citizens and cherish the right to vote.

But because many of these new citizens are elderly or disabled and don't drive or own cars, they couldn't get to the new polling site. That's why residents asked the board of elections last week to move the polling place back to Creekside. The board refused (voting 2-1).

And those two commissioners would be Jim Cawley and Charley (“I Have A Semi-Open Mind”) Martin. And the Courier Times editorial tells us that, according to Dem Commissioner Diane Marseglia (the sole vote in favor of moving the machines back to the apartment site), both of the Creekside letter writers “are or were GOP committee members.”

Russian-Americans and Indian-Americans at the Creekside Apartments filed a second petition with Bucks County Monday (3/31), once again alleging voter disenfranchisement and demanding a closer polling place.

The petition was signed by 23 residents of the apartment complex on Knights Road in Bensalem, according to attorney Kathryn Boockvar, who filed it on their behalf.

Deena Dean, director of the Bucks County Board of Elections, said changes to the voter district would be impossible before the April 22 primary.

Oh, but Dean had no trouble acting with haste to move the machines to begin with, didn’t she (and do I even need to mention that Dean is a Repug)? And Dean also tells us…

Other neighborhoods and retirement communities have asked for their own voting districts, but all have been turned down, Dean said. Federal law mandates that voter districts conform to census block lines from the most recent decennial census, she said.

That’s no excuse for not moving the machines back as far as I’m concerned; the worst that could happen is that the machines would be moved back to the site where they presently reside.

I’m not a lawyer, but if Cawley and Martin continue to obstruct from doing the right thing, then I think we have a potential violation of the Voting Rights Act (noted here). But of course, any enforcement actions would have to be executed by the Civil Rights Division of the Justice Department (that is, the Bushco Justice Department – sigh).

Given that this tactic is of the same odious variant as poll taxes and voter ID disenfranchisement, it looks to me that we now have a fourth Bucks County commissioner in addition to Diane, Cawley and Martin, and that would be Jim Crow.

And somewhere, Jay Russell smiles (and how ironic that the party that alleges voter fraud so frequently is so adept at actually practicing it).
Posted by doomsy at 2:03 PM

The citizen voters at Creekside will not give up this fight.So many of us came from countries that there was no freedom, worked hard at becomming US citizens and cherish our voting rights only to have it taken away ?This is not Democracy!

I agree with Natalia, let the two voters that are unhappy use absentee ballots and return the polls to Creekside apartments