More "Clucking Around" On Edwards 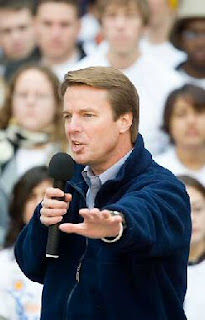 First we Markos calling John Edwards “an ass” for calling out Barack Obama on his invocation of the Republicans as “the party of ideas” and Obama's praise of Ronald Reagan (here).

Next, we have Julian Epstein telling us that Edwards should do the “honorable thing” and drop out of the Democratic primary if he does poorly in South Carolina on Saturday (here, and of course, Glenn Greenwald’s information here about Edwards’ recent trending in the polls was dutifully ignored).

Now, we have Dick Polman in the Philadelphia Inquirer today referring to Edwards as a “headless chicken” here (and how funny is it to read Polman pile on assumption after assumption – possibly correct, but we’ll see – about Edwards, but then chide others who do the same thing regarding St. McCain?).

(Oh, and by the way, Polman and the Inky, you might want to take a look at this survey today from Editor and Publisher telling us that philly.com’s readership dropped 63.8 percent from December 2006 to December 2007, coming in just barely under NJ.com, which had the biggest loss of the top 30 sites over that same period at 64.4 percent (note: please see comment for clarification). And I haven’t noticed any comments yet to Polman’s post, and unlike your humble narrator, Polman gets paid for this – sad when even the wingnuts don’t even bother to show up any more...never mind, I just saw one, and they eventually showed up including some character named jmc who does nothing but perpetually trash Democrats.)

And all of this actually is not a setup to another media bashing over the lack of Edwards coverage; there’s only so much I can do about that, and life is short (and at least this shows the guy has a sense of humor).

However, I do want to note that I haven’t heard Edwards or anyone else “pick up the baton” left by Chris Dodd on the issue of telecomm immunity on FISA since Dodd dropped out, and I believe it’s high time that John Edwards did so (here...and by the way, this doesn't say much for Obama or Hillary, seeing as how Edwards isn't even a senator any more).

Try to be accurate, at least. The study that you mention does NOT measure a decline in the readership of philly.com. Rather, as the story you linked to makes clear, the study refers to a decline in the average time that a reader spends on the site. Obviously, no decline is good, by any measurment. But you should at least get your facts straight. And I'm on an independent platform anyway; I get a lot of blog traffic from people who never go to philly.com.

OK, I’ll admit that I didn’t note that the story pertained to a percentage decline in terms of visit length as opposed to an actual visit in its entirety, which apparently was my erroneous assumption…but this doesn’t amount to a decline in readership? I’d be more concerned with trying to shore up that sad 63.8 percent number instead of splitting hairs over whether or not we’re talking about a decline in per-visit length or actual site visits.

And nothing to say about Glenn Greenwald’s numbers I see – things don’t look good for Edwards overall at the moment, I’ll admit, but a little balance would be nice, wouldn’t it?

And I seem to recall you were looking once for a “sheriff” for the Internet to monitor blogger content or something last July. Any luck with that?