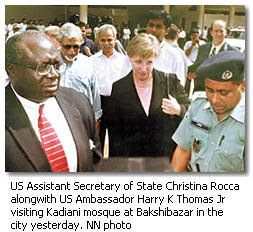 The Washington Post reports here that Harry K. Thomas, director of the State Department’s Foreign Service, recently told diplomats in that department that some of them will have to report to serve at the U.S. Embassy in Baghdad or risk losing their jobs.

As noted in the story…

At a town hall meeting in the department's main auditorium attended by hundreds of Foreign Service officers, some of them criticized fundamental aspects of State's personnel policies in Iraq. They took issue with the size of the embassy -- the biggest in U.S. history -- and the inadequate training they received before being sent to serve in a war zone. One woman said she returned from a tour in Basra with post-traumatic stress disorder only to find that the State Department would not authorize medical treatment.

Service in Iraq is "a potential death sentence," said one man who identified himself as a 46-year Foreign Service veteran. "Any other embassy in the world would be closed by now," he said to sustained applause.

Harry K. Thomas Jr., the director general of the Foreign Service, who called the meeting, responded curtly. "Okay, thanks for your comment," he said, declaring the town hall meeting over.

In notices e-mailed to Foreign Service officers around the world late Friday night, Thomas wrote that State had decided to begin "directed assignments" to fill an anticipated shortfall of 48 diplomats in Iraq next summer. Separate e-mail letters were sent to about 250 officers selected as qualified for the posts. If enough of them did not volunteer, the letters said, some would be ordered to serve there.

Foreign Service officers swear an oath to serve wherever the secretary of state sends them, but no directed assignments have been ordered since the late 1960s, during the Vietnam War. More than 1,200 of 11,500 eligible State Department personnel have already served in Iraq, but the growth of the embassy has led to an ever-increasing demand.

The notices, which most diplomats first learned about from the news media as the e-mails sat in their office computers over the weekend, appeared to have catalyzed unease that has been swirling through the Foreign Service over issues that include Iraq, underfunding and inadequate recruitment, perceived disrespect from the U.S. military and the job performance of Secretary of State Condoleezza Rice.

A poll conducted this month by the American Foreign Service Association found that only 12 percent of officers "believe that . . . Rice is fighting for them," union president John K. Naland said at yesterday's meeting, which was first reported by the Associated Press.

"That's their right. But they're wrong," said Thomas, who appeared to grow increasingly agitated as the questioning became more pointed.

"Eighty-eight percent of the country believed in slavery at one time. Was that correct?" Thomas responded, saying he was "insulted." Rice is fighting hard for them, he said. Amid scattered boos from the audience, Thomas added: "Let no one be a hypocrite. I really resent people telling me that I do not care about other Foreign Service officers."

Leave it to a typical Buscho loyalist to automatically play the “pity and sympathy” card when confronted with opposition to an unpopular policy.

But more than that, I’m wondering if the “my way or the highway” attitude of Thomas towards State Department diplomats told to go to Iraq reflects the attitude he showed here towards past alleged discrimination of African American diplomats in the Foreign Service.

As you can read from Thomas’s letter at the bottom of the page about African Americans and the State Department, he is pretty strident about enumerating alleged offenses against African Americans who once worked at State from just after World War II into the 1960s…

Charles Hanson, a brilliant linguist, was shipped off to Liberia without the benefit of being able to bid on other posts. Ollie Ellison, who retired after serving as a deputy chief of mission, was told during his initial background investigation that the Department did not approve of mixed marriages; he was a Protestant marrying a Catholic. Ulrich Haynes, an Amherst and Yale graduate who served at the National Security Council and as ambassador to Algiers during the Iran Hostage Crisis, recalls meeting spouses at this welcome party who were angry at what State "had sent them," a black ambassador.

Shirley Barnes, later ambassador to Madagascar, was discouraged from serving in NEA by superiors who told her that the locally employed staff would never work for a black woman. They were wrong. And John Withers Sr., who became AID Mission Director in India and Ethiopia, was told to bring a bag lunch on his first day at work because he would not be permitted to join his colleagues who were lunching at a drug store across from State.

Thomas also tells us that one-time African American diplomat Ralph Bunche one “chafed at how…talented black professionals were held back,” and he also tells us that Alger Hiss “was ordered to fail all takers with the caveat that he take test takers names and backgrounds to senior officers for selection. African- Americans were routinely rejected.”

And Thomas offers no proof whatsoever to support any of these claims; it is up to us to take him at his word if we choose to do so.

Now I’m not going to argue for one second that America during this period didn’t practice some pretty overt racial discrimination, but based on this, I’m starting to wonder if Thomas is a little more concerned about payback for the past travails suffered by African Americans at State than trying to administer a difficult and actually dangerous situation with his Foreign Service employees.

And I’ll leave aside for now the fact that he’s working for a regime that has sent some pretty clear messages to African Americans in this country as to the little regard they have for them, to say nothing of the Republican Party in general these days. Also, I know the point can be made that the diplomats realized this could happen when they signed up for service, but under a sane presidential administration run by adults, this “push back” should be more of a reason for President Brainless and his cohorts to reconsider their wrongheaded policy in Mesopotamia (yes, and I know – “and then I woke up”).

And the attitude of the Director of the Foreign Service, by the way, shows a similarity to me with that of another prominent figure in our government who shares the director’s last name and racial heritage (here; a relative maybe?).

Update 11/02/07: And of course, when all else fails, leave it to the Repugs to resort to name calling (re: Duncan Hunter's "nervous nellies" comment here).
Posted by doomsy at 11:33 AM

I guess these diplomats haven't heard how much safer The Surge has made Iraq.

I picked up on that tongue-in-cheek comment; to be sure, some protest on their part prior to their own tails being on the line would have been appropriate, IMHO, reprisals be damned.