Dubya Is All Wet, Again 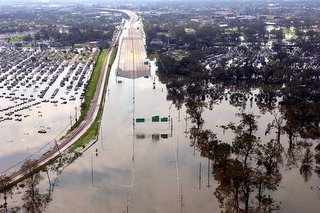 As we know, President Photo Op made a bee line to California last week to get in the way of the fire prevention effort, and in his quest to somehow make himself and FEMA look competent on this occasion, as opposed to their horrific ineptitude that is, to date, the enduring legacy of Hurricane Katrina, he said the following (from this story on Saturday)…

Yet the president drew the contrast on Thursday in California when, appearing with Gov. Arnold Schwarzenegger, a Republican, he said, “It makes a significant difference when you have somebody in the Statehouse willing to take the lead.” The remark was widely viewed as a veiled swipe at Gov. Kathleen Babineaux Blanco, a Louisiana Democrat, who says she resents it.

Another typical cheap shot from President Brainless; yes, there were failures on all levels of government when Katrina hit, but a life form with a speck of humility would know that and thus realize the best thing to do is to shut his pie hole.

And so, if Dumbya has sounded off, then leave it to his minions to chime in also (including this excerpt featuring a former adviser named Pete Wehner, and why the Times feels that it’s necessary to quote Rich Lowry and thus give him a free plug is beyond my understanding)…

Bush administration officials have long believed that if Ms. Blanco had immediately allowed the federal government to assume control of the military response in Louisiana, the outcome would have been different. That debate is playing out again and getting caught up in state politics.

With the election last week of Representative Bobby Jindal, a Republican, to succeed Ms. Blanco, who did not seek re-election, Bush administration allies argue that the people of that state have rendered their own judgment.

“There’s a reason she’s former Governor Blanco,” said Mr. Wehner, the former Bush adviser, who is now a senior fellow at the Ethics and Public Policy Center in Washington. “It’s not an effort to shift blame, because the federal government made mistakes, too. But I think with the distance of time and history, the truth will emerge, and the truth is that it was a massive failure at the state and local level.”

OK, now that we’ve dispensed with fantasy time, let’s revisit this post and consider the following…

And as noted from this link, here is how the Preznit responded in a speech on Thursday September 1, 2005…

"George W. Bush gave one of the worst speeches of his life yesterday, especially given the level of national distress and the need for words of consolation and wisdom. In what seems to be a ritual in this administration, the president appeared a day later than he was needed. He then read an address of a quality more appropriate for an Arbor Day celebration: a long laundry list of pounds of ice, generators and blankets delivered to the stricken Gulf Coast. He advised the public that anybody who wanted to help should send cash, grinned, and promised that everything would work out in the end."

And lest we forget, Arianna Huffington reminds us here of Dubya’s “flyover” moment on Wednesday August 31st, two days after Katrina hit.

Yep, he doesn’t have a damn thing to act cocky about – as usual – given the contrast between the California fires and Katrina (or, as New Orleans Mayor Ray Nagin put it questionably, “a paper cut versus an amputation”).

And from the water to the air, we have the following from the Bucks County Courier Times on Saturday (in its “Thumbs Up, Thumbs Down” section - a "Thumbs Down" offered here)…

To the federal government for withholding information about air travel safety because officials fear it would upset travelers.

NASA recently conducted a survey of pilots that revealed that near-collisions, runway interference and other safety problems occur much more than previously thought, according to an individual close to the survey who spoke on the condition of anonymity. However, the results are being kept under wraps since they could “materially affect public confidence in, and the commercial welfare of, the air carriers…”

Love that “and the commercial welfare of” line, don’t you? Sounds like code for “We don’t want you to know how much danger you could be in because it might hurt the airline industry.” At least this time federal officials are being transparent about their misguided motivations.

It never ceases to amaze me how a media outlet of one type or another that is inherently Repug-friendly (with notable exceptions, such as the C-T’s endorsement of Patrick Murphy last year) professes surprise when it realizes that, my God, these people don’t govern well because they don’t like government!

Also, I don’t know if anyone besides me noticed, but the new work rules implemented under Dubya’s FAA for the air traffic controllers has had the effect of making many more of them retire than expected as of September 30th, as noted here (OK, on cue, Bushco – “no one could have foreseen this…”).

Hmmm, I seem to recall another Oval Office Repug who had trouble with air traffic controllers; guess this is where Dubya got the idea to mess around with these people, huh?