A Fein Time For Consideration 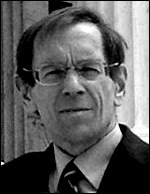 This AP story tells us that Sen. Edward Kennedy has decided to vote against confirming Judge Michael Mukasey as the next Attorney General, prompting the latest hissy fit in front of a bunch of sympathetic conservatives from Incurious George (here).

If it turns out that Mukasey isn’t confirmed (and I don’t know why the hell any Democrat or politician of any party really who professes a love for this country would do so, given the fact that Mukasey thinks presidential power should supersede the Constitution in some cases, as well as his refusal to call water boarding torture), then I have an idea for another candidate.

And that would be Bruce Fein.

Yes, I know he’s a conservative (would we get anyone of any other stripe under this regime?), but as noted here by John Nichols…

Fein is qualified. A much-published Harvard Law School graduate who served as an associate deputy attorney general from 1981 to 1982 and as general counsel to the Federal Communications Commission, he has frequently been called on by Republicans and Democrats to help them sort through prickly Constitutional issues.

Fein is a true conservative, and he would serve as a very conservative Attorney General. But he would take his oath of office seriously, particularly the section requiring him to defend the Constitution rather than the political whims of the president and vice president.

Unfortunately for his own ambitions, Fein is a sincere conservative. As such, the man Ronald Reagan trusted to enforce the laws of the land has called, most recently in an appearance we did together on “Bill Moyers’ Journal,” for the opening of impeachment hearings targeting President Bush and Vice President Cheney. Additionally, he was working with a Democratic congressman on articles of impeachment against Gonzales at the time of the Attorney General’s resignation.

Fein’s willingness to put principle above politics undoubtedly disqualifies him from consideration by Bush as a successor for Gonzales. But (conservative guru Richard) Viguerie and other Constitutional conservatives owe their compatriot — and their country — better. Anyone who is serious about cleaning up the mess at the Department of Justice knows that the job will not be done by lawyers who have, by their actions, shown that they do not understand the basic intentions or values of the nation’s founding document.

Bruce Fein’s name belongs on the list of conservatives who would make appropriate replacements for Alberto Gonzales. Indeed, Fein’s name should be at its top.

Also, this letter to the editor from Fein appeared in the New York Times on Sunday…

Re “Clinton Plans to Consider Giving Up Some Powers” (news article, Oct. 24): The American Freedom Agenda, an organization of conservatives founded last March 20 to restore checks and balances and protections against government abuses, requested all presidential aspirants, including Senator Hillary Rodham Clinton, to sign an American Freedom Pledge.

They were asked to renounce the following powers if elected: torture; presidential signing statements; indefinite detentions of American citizens as enemy combatants; military commissions that combine judge, jury and prosecutor; spying on American citizens in contravention of federal statutes on the president’s say-so alone; kidnapping, imprisoning and torturing suspected terrorists abroad; executive privilege to shield the executive branch from Congressional oversight; prosecuting journalists under the Espionage Act for exposing national security abuses; listing organizations as terrorist groups based on secret evidence; suspending the writ of habeas corpus during the conflict with international terrorism; and invoking the state secrets privilege to deny victims of constitutional wrongdoing any judicial remedy. Senator Clinton has balked at signing the pledge, as have all other candidates except Representative Ron Paul.

If a letter like that doesn’t make big points in Fein’s favor, then I don’t know what does.

Update 11/01: Ted Kennedy states why he will vote against Mukasey's confirmation here.

Update 11/02: This is probably the first time I've disagreed with Kagro X on something.
Posted by doomsy at 12:52 PM

thanks for tipping me off to fein's initiative... it's absolutely the right thing to do, imho, and deserves widespread attention... (ya, right...) anyway, i'm going to post it as well...

Any help is appreciated; you're welcome.