Dubya Can't Hyde From This Choice 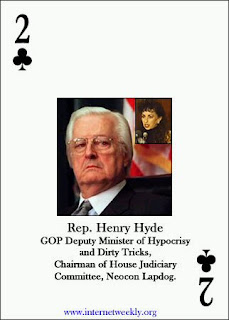 This tells us that Dubya announced this year’s recipients of the Presidential Medal of Freedom, and some of the names are truly illustrious indeed. They include Brian Lamb of C-SPAN, the novelist Harper Lee who wrote “To Kill A Mockingbird” (a fave), NAACAP former Executive Director Benjamin Hooks, economist and 1992 Nobel Prize winner Gary Becker, and Francis Collins, director of the National Human Genome Research Institute.

Yes, you read that correctly…Henry Hyde.

As in “the House-leader-of-the-Clinton-impeachment-circus Henry Hyde, the adulterer-who-involved-himself-in-a-four-year-affair-with-a-married-woman-from-1965-to-1969-and-ultimately-wrecked-her-marriage Henry Hyde” (dismissing it as a “youthful indiscretion”…see how casually he strolls away from the train wreck he created).

I know he served our country in World War II, but apart from that, he, along with the more odious Jesse Helms, has been one of the omnipresent figures of Repug sanctimony and entitlement throughout the latter part of the prior century. Hyde and his ilk polluted our political and social landscape throughout, from the days when conservatives were rightly relegated to minority status, to their tragic ascendancy, and now to their precipitous decline once more.

But see, Hyde is 82 and infirmed now, so Dubya feels that he must give him this undeserved honor to whitewash his intolerance and burnish his freeper cred for all time.

As I’ve contemplated this joke of a nomination for this prestigious award, I’ve found myself wondering exactly what it is about Hyde that turns my stomach so thoroughly, and I think the letter from this link ends up capturing it pretty well.

Hyde wrote it to Sen. Richard Durbin when his fellow member of the Illinois Congressional Delegation was pondering whether or not he should vote to confirm Hangin’ Judge J.R. for the Supreme Court (Durbin, in his wisdom, voted no), and in the letter, Hyde disingenuously tries to bring Durbin over by appealing to their shared Irish Catholic heritage (between Hyde, Durbin and Roberts).

As far as I’m concerned, this is a typically deceitful move by Hyde (totally ignoring the rabid anti-choice and pro-business orientation of Roberts, a fellow traveler if ever there was one), who helped write the template for this sort of behavior back in the ‘80s and ‘90s when it stood out for being so noticeably disingenuous, though it is sadly commonplace now (“oh, help me…I’m a poor, oppressed conservative being victimized by those bad liberals again – WAAAHHHH!!!!”).

And another thing, Henry; your humble narrator is Irish Catholic also, and as far as I’m concerned, you are one of the least deserving miscreants I have ever witnessed in public life, and you deserve this award as much as I do (not trying to heap kudos on myself, I assure you). If you tried a tactic on me like you did with Durbin, I would tell you what you could do with it in no uncertain terms, and I would leave it up to Him to forgive me for my actions.

So enjoy this unjustly provided moment in the limelight, Henry. The rest of us can read here to find out more about what a “powerful defender of life” you are.