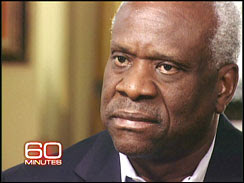 So Supreme Court justice Clarence Thomas had a big party the other day to celebrate the release of his new book with his other neocon fellow travelers.

I don’t think there is anyone else in public life, with the possible exception of Dubya, who has risen to a position of prominence so far above his qualifications who is so resolutely bitter about it, imaging enemies everywhere he looks.

NAACP Chairman Julian Bond and Thomas talked about Georgia. Thomas posed for a picture with a woman in a huge red hat. "I like that hat!" he said to Linda Softli of the Black Republican Women.

Given Bushco’s contempt for African Americans in this country (one word: Katrina, and other evidence is provided here), can someone please explain to me why the leader of an organization that ostensibly represents African Americans would have any regard whatsoever for Clarence Thomas, who has openly opposed affirmative action (as columnist Eugene Robinson notes here, among some other choice observations)?

I know there is an obvious reason, but a civil rights titan such as Julian Bond stains himself and those he represents by giving someone like Thomas even so much as the time of day (and though I don’t hold Stephen A. Smith culpable since he makes his living reporting on a wholly other business, it would have been nice if he’d decided to brush off Thomas also).

And by the way, like many others, I had problems with Thomas way before the Anita Hill business flared up (and what a small man Thomas is to hang onto that after 16 years).

When justice Thurgood Marshall stepped down from the high court, he said that he should not be replaced by “the wrong Negro.” Even though I don’t believe Marshall had Thomas in mind when he said that, those words were still prescient.

Thomas to me is the epitome of narcissistic conservative entitlement. A cipher for his ideological betters, he should not be surprised when he receives scant congratulation for favors that are almost completely unearned.
Posted by doomsy at 1:24 PM