The World According To “Genghis” Cohen 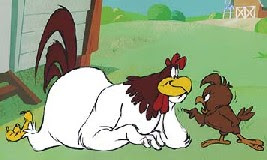 My goodness, is Roger Cohen in a spirit of jingoistic right-wing triumphalism today in the New York Times, or what (here)? I haven’t seen such armchair warrior ferocity since Don (“The Defense Secretary We Had”) Rumsfeld skipped out of Washington, D.C. for the comfy confines of the Hoover Institution.

Tristero over at Hullaballo (h/t Atrios) addressed a good bit of what I’d planned to say very well here, so I’ll just point you over there. However, Cohen did manage to sneak in some other propaganda that I want to comment on, to wit…

When John Kerry was vilified as a flip-flopping liberal by those armchair warriors, Bush and Cheney, I knew where I stood. When Michnik and Kouchner are neocons and MoveOn.org is the Petraeus-insulting face of never-set-foot-in-a-war-zone liberalism, I’m with the Polish-French brigade against the right-thinking American left.

(Cohen defines somewhat who Koucher is, but he really doesn’t bother to say much about Michnik – oh well…).

More to the point: for Cohen’s information, many members of MoveOn are veterans as well as family members or relatives of currently serving members of our military. And MoveOn is their voice (as noted here).

And very much unlike you, we opposed the wrongheaded preemptive war in Iraq, vilified then as America-hating appeasers, and vilified now by the likes of you for pointing out that we were right all along.

And by the way, it seems that the latest neocon trick, in an ongoing effort to compare Iraq to some other reasonably successful military episode from our history, is to compare the Iraq war with the intervention we led with the U.N. against Slobodan Milosevic and what was once Yugoslavia in the 1990s.

The comparison doesn’t hold up for me because, as far as I know through that action, Bill Clinton wasn’t responsible for the deaths of 3,808 (at last count) of our military personnel.
Posted by doomsy at 9:37 AM