As most people living in this locality know by now, the Bucks County Courier Times, on occasion, does feature enlightened commentary on its editorial page from people such as Gene Lyons, Marie Cocco, Paul Campos, and others of a liberal/Democratic/progressive persuasion. However, much more often than not, it is home to a seemingly endless parade of self-righteous freeper pundits who are only too happy to scold others whose only offense is to live lives or engage in a particular thought or behavior deemed repugnant by someone who has been granted column space.

I know it is pointless to answer these people and counterproductive ultimately. I don’t have any raw numbers on this, but I would guess that the audience that actually thinks these right-wing egotists know what they’re talking about is shrinking by the minute. However, I sometimes find their behavior too offensive to ignore.

And today is one of those times.

Apparently, Ben Stein, the sometimes actor, wannabe comedian and full-time Republican pontificator, read an essay of sorts that he wrote on CBS Sunday Morning recently (a show I probably should watch once more; I liked parts of it, and I have a feeling I’d also pick up more posting material). And, in keeping with the M.O. for his ilk, it chides America for an alleged collapse in moral values.

So of course, it was dutifully reprinted in the Courier Times today (and in the article, Stein criticizes the late “Madeleine Murray O'Hare” – nice to get her name right, Ben; I’ll let you look up the correct spelling.)

This paragraph, however, stood out for me…

Then Dr. Benjamin Spock said we shouldn't spank our children when they misbehave because their little personalities would be warped and we might damage their self-esteem (Dr. Spock's son committed suicide). We said an expert should know what he's talking about. And we said OK.

That is truly low (and as you can see here, Ms. O’Hair and Dr. Spock are familiar targets for Stein).

If the guy carried by Jimmy Kimmel on that former game show wants to criticize Dr. Spock for his theories on child rearing, his protests against the Vietnam War in the ‘60s, or the fact that Spock may not have given his first wife enough credit for his books, then go ahead. But trying to hold Spock accountable for the death of a family member is truly scurrilous.

Besides, Ben, it wasn’t Spock’s son who killed himself; as noted in this Wikipedia article, it was his grandson (get your facts straight, as conservatives love to tell me when they argue but find they don’t have a leg to stand on).

As Paul Krugman notes so astutely today, though, demonizing and ridiculing others, including children (and trying to make a joke out of it) is as natural to the freepers as breathing (and as Krugman points out, the precedent was set by The Sainted Ronnie R in 1964). 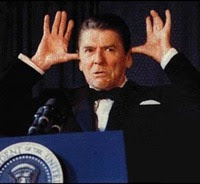 Oh, we just loved Ronnie and his optimism, didn’t we?

Sure we did. It’s easy to preach about “morning in America” and “a shining city on a hill” when you’re rich and pampered by your corporate benefactors (as Stein is also).

Only a conservative could moralize about people who believe in God getting pushed around (and is that even happening?) by publicizing the misfortune of others instead of decrying with all of his or her might an instance when that is actually happening for real.
Posted by doomsy at 9:02 AM