How About A "No Nuke" Compact? 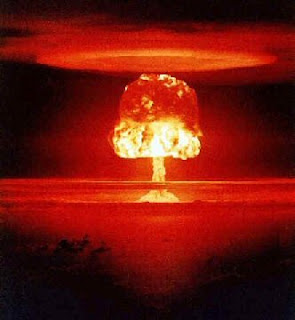 I actually thought these three might have been doing the right thing (silly me), until I read about the so-called Hyde Act that was devised when Dubya and Indian Prime Minister Manmohan Singh in July 2005 (which is what the three are contesting).

On the nuclear front the Act offers India access to technology for new, bigger, and better reactors, as well as uranium for those reactors - something we are short of domestically. On the foreign policy front the Act shows that India can now create a space for itself and eventually be recognized as a nuclear state. By no means are these achievements to be scoffed at.

Critics point out that what it offers, the Act can also take away…

On the policy front India is yet to see any benefits, such as recognition as a nuclear weapons state. And missteps in negotiation have already reduced India’s ability to extract future benefits. India must take steps to limit those foreign policy losses. And the question to ask really is, when India must decide to support Iran, test a nuclear weapon, or buy gas from Myanmar, will it be able to say to the US, “No, thank you”?

I don’t really have any sympathy for India when it comes to their unhappiness over lack of recognition as a nuclear weapons state. To accomplish this, all they have to do is sign the Nonproliferation Treaty; I have a feeling, though, that they will never do that unless Pakistan does also (and I hold Dubya primarily responsible for allowing the India deal to go through without getting both India and Pakistan to sign the treaty – a tall order, but Presidents are supposed to facilitate stuff like this instead of thumbing their nose at all established protocols for political expediency).

And I don’t understand why the three House reps I noted above are putting obstacles in the path of the India deal when it in essence was brokered by Henry Hyde (a fellow Repug, of course) through the act bearing his name (with the Hyde deal apparently tying India’s hands for future development, creating a scenario where, as noted above, they may turn to their neighbors instead of us down the road because, say, Iran may end up offering a better deal for enrichment of nuclear material).

This is what happens, by the way, when we allow countries to develop nuke programs without treaty enforcement. As the Wikipedia article notes, India, Pakistan, Israel and North Korea have not signed the treaty (I know North Korea is a basket case on this issue, though they seem to be moving in the right direction, but we should be pressuring Pakistan on this also, and there is no reason on earth why Israel should not have signed by now as far as I’m concerned).

On the issue of trying to enforce compliance on nuclear development, though, there is another avenue that I haven’t heard anyone discuss.

This takes you to a column at The Huffington Post by Jim Talent, the (happily) former Repug senator from Missouri who is touting something here called the Global Compact. This excerpt tells us that…

The Global Compact is an agreement on the part of its signatories to advance 10 principles -- two on human rights, four on labor standards, three on the environment, and one anti-corruption standard. It shifts the debate from "corporate social responsibility," and concentrates instead on Environmental, Social, and Governance issues (ESG).

As important as all of these are, I would think that a principle advocating the safe development of nuclear power for non-military industrial use (or language to that effect) should be included. Even though the compact is entirely voluntary, the nuke issue trumps all others concerning our safety and the quality of life on this planet.

And this mentions other issues with the Global Compact that I honestly don’t expect a pro-business apologist like Talent to raise, so I’m doing so here (and here also).
Posted by doomsy at 12:43 PM

You should re-read (or just read if you have never before) the NPT.

For the records, India NEVER said that it will NOT sign the NPT. In fact, it has always maintained and its official position to this day is that it is ready to sign the NPT if and only if it can sign it as a NWS (nuclear weapons state).

You would be well informed to know that the NPT divides states into two categories - NWS (the five states) and NNWS (non nuclear weapons state).

India's questions are, and arguably legitimately so, a) why should it have to sign it as NNWS? and b) what authority do the five states have to tell India to be a NNWS?

I’ll admit that I haven’t read the NPT and I’m not aware of the differences between a classification as a NWS or a NNWS, though I’ll try to read the treaty later.

It just seems to me that the agreement was overly restrictive towards India and put them in a position where they would be looking toward their neighbors instead of us for material to continue expansion as its nuclear capability develops. Maybe that was the plan on the part of Bushco because India wouldn’t sign the agreement unless they did so as an NWS. If that was the plan, it was a stupid one as usual, with the three house reps tripping over themselves to oppose the agreement after Hyde had done his best to rig it in our favor anyway (and what does it tell you that someone like Henry Hyde is telling another country how to develop its nuke program, by the way?).

The only thing I care about is whether or not India, and the other non-NPT-signing countries, will use their nukes for military purposes. If India wants to trade with Iran as it goes forward…well, that doesn’t make me happy, but it’s their right. It’s just that this whole thing seems to me to be aimed towards facilitating opportunities for American companies to do business with India and cutting out other countries in the process, with (as usual) no eye towards future consequences (so Bushco could say yet again that “no one could have foreseen this” when something goes wrong, when in reality, it turns out that EVERYONE could have foreseen this).