Lou Dobbs Is All Wet on UNCLOS 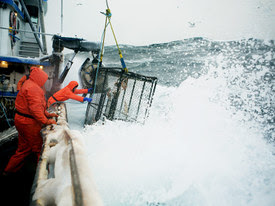 I really have to wonder about the motives behind Lou Dobbs.

His opinion column today gives the reader the implication that he’s going to chastise Dubya for his utter nightmare of a presidency, and Dobbs does this for the first few paragraphs.

However, after blaming the Democrats for “seeking passage of the disastrous immigration reform legislation” (I know I have no hope whatsoever of trying to convince Dobbs and his like-minded brethren that there was a lot that was good in the measure, such as providing a path to citizenship for the illegals, thus acknowledging the reality that they’re here to stay), Dobbs then laments that the Senate Foreign Relations Committee will once more hear arguments about the Law Of The Sea Treaty

This is what Dobbs tells us about the treaty (which, of course, was rejected by The Sainted Ronnie R and encouraged by that baaad, Monica-Whatsername-cheating Bill Clinton)…

The Law of the Sea Treaty would undermine our national sovereignty and act as a back door for global environmental activists to direct U.S. policy.

It would hold the United States to yet another unaccountable international bureaucracy and constrain our national prerogatives. Aside from that, the treaty is wholly unnecessary. The U.S. Navy already enjoys international navigation rights by customary practice.

…unless the United States joins up, it could very well lose out in what is shaping up as a mad scramble to lay claim to what are believed to be immense deposits of oil, gas and other resources under the Arctic ice — deposits that are becoming more and more accessible as the earth warms and the ice melts.

The Law of the Sea will provide the forum for determining who gets what. The law gives each nation control over its own coastal waters — an “exclusive economic zone” extending 200 miles offshore. The rest is regarded as international waters, subject to agreed-upon rules governing fishing, protection of the marine environment, navigation and mining on the ocean floor. A country can claim territory and mineral deposits beyond the 200-mile limit, but only if it can prove that the seabed is a physical extension of its continental shelf. Claims and disputes will be resolved by arbitration panels established by the treaty.

The Russians, the Canadians and the Danes are all busily staking claims to thousands of square miles of the Arctic seabed beyond their 200-mile zones; the Russians have already planted a flag 15,000 feet under the North Pole. And two weeks ago, a U.S. Coast Guard cutter, Healy, embarked on the third in a series of polar mapping expeditions to help strengthen the United States’ territorial claims to the seabed off Alaska.

But the United States will have a hard time pressing those claims unless it ratifies the treaty and gets a seat at the negotiating table. One of the main right-wing arguments over the years is that the treaty would threaten American sovereignty by impeding unfettered exploitation of the ocean’s resources — a “giant giveaway of American wealth,” in the words of one critic. The facts suggest just the reverse. By not signing, we could easily find ourselves out of the hunt altogether.

And by the way Lou, since you’ve made a living out of throwing stones at both of our major political parties (deserved at times, I know), I’m still waiting for you to put your money where your mouth is and act on the recommendation I gave you here (bullet item #3).