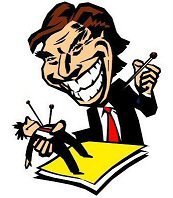 As I’ve said in the past, I’m not sure how, but somehow I ended up on the Email distribution list of Conservatives Betrayed, the organization founded by wingnut direct mail guru Richard Viguerie. By saying that, though, I don’t mean for a minute to imply that Viguerie is dumb – hardly. He’s managed to channel utterly misinformed and prejudicial regional nationalist outrage and use it to create a marketing empire (I don’t know his net worth, but I suspect it’s in the millions).

Viguerie has that talent that all people who solicit for money seem to have, I grudgingly admit, and that is to make success sound like failure and earnestly plead for money at the same time (and as you might expect, as far as Viguerie is concerned, everything represents “good news for conservatives,” and you can put Turd Blossom’s resignation into that category also)…

(Manassas, Virginia) The following is a statement from Richard A. Viguerie, author of Conservatives Betrayed: How George W. Bush and Other Big Government Republicans Hijacked the Conservative Cause(Bonus Books, 2006), on the resignation of White House Deputy Chief of Staff Karl Rove:

“Karl Rove’s departure from the White House is good news for conservatives. We may—may—have a more conservative Bush presidency with Rove back in Texas.

“As President Bush’s chief political advisor, Karl Rove was a master in the care and feeding of conservative leaders, keeping them mostly silent as the Republican Party moved Left during the Bush presidency.

“Moved left?” That is so bizarre that I don’t know how to respond. And I love the “care and feeding” of conservative leaders line, as if we’re talking about a flat of crocuses or peonies (may be intellectually equivalent to potted plants, though, I must admit).

“He used the usual carrot and stick to do this. The carrot was access to the White House—and conservative leaders proved just as vulnerable as others to the lure of a photo op with the President, lunch in the West Wing, or a returned phone call from Karl Rove. The stick was fear—speak out, and not only will you lose any hope of access, you will be branded as an extremist, or someone who’s helping the Democrats by speaking out.

Funny, but I don’t recall hearing any complaints from Viguerie or his ilk while the seeds for conservative disaster were sown by this bunch that thought they could create their own reality, or something. I didn’t hear Viguerie saying that we shouldn’t invade Iraq because there were a bunch of reasons why it didn’t make any sense. I didn’t hear Viguerie complaining about the estate tax cuts and other horrific fiscal policies that squandered the Clinton surplus and created the biggest budget deficits this country has ever seen.

(And please don’t give me this, “Kyoto was wrong because it didn’t include India and China,” or whatever. It was intended as a framework that would be revisited as economies changed and prospered over time. Next…).

“Using both carrot and stick, Karl Rove was able to silence or get the support of most conservative leaders as President Bush and congressional Republicans greatly expanded the size and reach of the federal government, including (but certainly not limited to)…

“Yes, Karl Rove was a political genius—he was, after all, the successful architect of Bush’s election in 2000 and reelection in 2004. But as the President’s chief policy advisor, Rove was the architect of George W. Bush’s betrayal of the conservative cause.

Rove manipulated people’s fears and prejudices and enhanced the anti-Democratic Party narratives perpetuated by our media and other Republican politicians (and, unwittingly, by Democrats themselves from time to time), and that had a lot to do with the ability of this regime to maintain power. If Bush had run as the strict fiscal and moderate social conservative envisioned by Viguerie in 2000, he would have legitimately lost (and there would never have been a 2004 to discuss, in that event).

“Karl Rove’s biggest failure was to leave the White House without achieving his stated goal of establishing the Republicans as America’s permanent governing party.

That is impossible for either political party, which is a good thing.

To even mention that today—after the 2006 elections, President Bush’s plummeting poll numbers, and the GOP’s bleak prospects for 2008—brings embarrassment or laughter, depending on your political viewpoint. No wonder Karl Rove wants to forget about those boasts.

“Rove failed in that goal primarily because he attempted to advance the Republican Party by using raw, naked political power and bribing voters.

I’d never heard the “bribing voters” part before; interesting. Not surprising, though.

He copied the Democrats and was more successful than them—for a while. But then conservatives and independents caught on to his game. We started rebelling, first over Harriet Miers and most recently over the amnesty bill.

It’s perversely funny that the Iraq war seems utterly irrelevant to Viguerie and his brood (just lumping it under the cosmetic classification of “nation building” that sounds so sterile and does not imply massive human suffering in any way).

Meanwhile, the Republican Party had lost its “brand” as the party of small government.

He’s absolutely right about that.

How do we recover from the Rove Era? We have to reject the bribing of voters and instead build on President Reagan’s legacy.

We must re-establish the conservative movement (and the Republican Party, if it wishes to survive) as the movement and party of ideas, empowering people instead of government, and with a strong national defense but no more nation-building.

Good. Then open up your goddamn mouths and protest the Iraq war and tell Deadeye Dick to shut his pie hole about attacking Iran, OK? Why don’t you people actually try to help for a change?

“Bush’s brain” will soon be gone. Let’s hope that wiser counsel prevails in the White House in the future, but let’s not depend on that. We conservatives have work to do.”

Your “work,” as far as I’m concerned, is to re-enter the world of thinking, logical people. Or is that asking waaay too much?

Isn’t it amazing to watch Viguerie absolutely turn on the guy who was the person most responsible for giving the wingers everything they could hope to have? Look at the Supreme Court, unfortunately, to say nothing of federal courts all over the country. And the U.S. Attorneys; we don’t know exactly how many of those handpicked by Monica Goodling have infiltrated what was supposed to be a politically impartial function administered by the executive branch. And all of the politicization of our government agencies to favor Viguerie’s precious conservative cause.

As great as it is that the Democrats control Congress (despite their FISA cowardice, of course, and their weak-kneed de facto consent on the “management” of the Iraq war), look what it took to accomplish that (and as I’ve said, if Dubya had fired Rummy before the election, we probably would not have won the Senate, and the House majority would probably be smaller). It will take probably two decades at least to undo the rest of their damage to our judiciary, among other areas of government.

Sadly, Rove did more for Viguerie than he could ever have dreamed of.