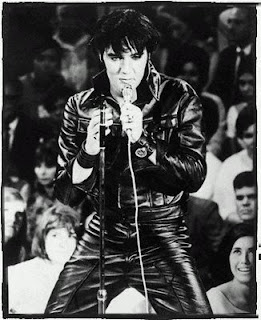 As many of us know, Elvis Aaron Presley died thirty years ago today. I recall hearing the news from Geraldo Rivera, of all people, who reported on all of the medications Presley consumed near the end of his life from Dr. George C. Nichopoulos (“Dr. Nick”), and I found myself amazed that he lived for as long as he did (though, at 42, Elvis died at way too young of an age).

There is so much to post about concerning Presley (including the fact that he continues on as a “brand” earning big bucks, as noted here), but I want to comment on a misconception about him that still lingers for some reason, noted by Presley biographer Peter Guralnick in a column he wrote for the New York Times (behind the Times Select wall now, unfortunately).

The misconception is that Elvis Presley was a racist, a claim that is patently false. As Guralnick tells us, his music stood for…

…the breakdown of barriers, both musical and racial. This is not, unfortunately, how it is always perceived 30 years after his death, the anniversary of which is on Thursday. When the singer Mary J. Blige expressed her reservations about performing one of his signature songs, she only gave voice to a view common in the African-American community. “I prayed about it,” she said, “because I know Elvis was a racist.”

And yet, as the legendary Billboard editor Paul Ackerman, a devotee of English Romantic poetry as well as rock ’n’ roll, never tired of pointing out, the music represented not just an amalgam of America’s folk traditions (blues, gospel, country) but a bold restatement of an egalitarian ideal. “In one aspect of America’s cultural life,” Ackerman wrote in 1958, “integration has already taken place.”

It was due to rock ’n’ roll, he emphasized, that groundbreaking artists like Big Joe Turner, Ray Charles, Chuck Berry and Little Richard, who would only recently have been confined to the “race” market, had acquired a broad-based pop following, while the music itself blossomed neither as a regional nor a racial phenomenon but as a joyful new synthesis “rich with Negro and hillbilly lore.”

No one could have embraced Paul Ackerman’s formulation more forcefully (or more fully) than Elvis Presley.

Guralnick also recounts an interview Presley gave where he told the reporter that he used to...

...“listen to Arthur Crudup, the blues singer who originated ‘That’s All Right,’ Elvis’s first record. Crudup, he said, used to ‘bang his box the way I do now, and I said if I ever got to the place where I could feel all old Arthur felt, I’d be a music man like nobody ever saw.’”

It was statements like these that caused Elvis to be seen as something of a hero in the black community in those early years. In Memphis the two African-American newspapers, The Memphis World and The Tri-State Defender, hailed him as a “race man” — not just for his music but also for his indifference to the usual social distinctions. In the summer of 1956, The World reported, “the rock ’n’ roll phenomenon cracked Memphis’s segregation laws” by attending the Memphis Fairgrounds amusement park “during what is designated as ‘colored night.’”

That same year, Elvis also attended the otherwise segregated WDIA Goodwill Revue, an annual charity show put on by the radio station that called itself the “Mother Station of the Negroes.” In the aftermath of the event, a number of Negro newspapers printed photographs of Elvis with both Rufus Thomas and B.B. King (“Thanks, man, for all the early lessons you gave me,” were the words The Tri-State Defender reported he said to Mr. King).

When he returned to the revue the following December, a stylish shot of him “talking shop” with Little Junior Parker and Bobby “Blue” Bland appeared in Memphis’s mainstream afternoon paper, The Press-Scimitar, accompanied by a short feature that made Elvis’s feelings abundantly clear. “It was the real thing,” he said, summing up both performance and audience response. “Right from the heart.”

Despite all of this, as Guralnick tells us, a rumor developed and persisted that Presley, either at an appearance in Boston or on “Person To Person” with Edward R. Murrow, said “The only thing Negroes can do for me is buy my records and shine my shoes.”

As it turned out, he had never appeared in Boston or on “Person To Person” prior to supposedly stating that; however, the rumor persisted to the point where Presley gave an interview to reporter Louie Robinson of Jet where he said that anyone who knew him also knew that he could never have uttered those words. Presley pointed out that, as a teenager, he attended the church of Rev. W. Herbert Brewster, whose songs had been recorded by Mahalia Jackson and Clara Ward and whose stand on civil rights was well known in the community. (Elvis’s version of “Peace in the Valley,” said Dr. Brewster later, was “one of the best gospel recordings I’ve ever heard.”)

I would also like to note something else Guralnick did not mention, and that is Presley’s performance in the 1960 film “Flaming Star” directed by Don Siegel, where Presley played Pacer Burton, the half-breed son of a Kiowa Indian mother and a Texas rancher father. The movie, though set in the post-Civil War American west, definitely served as a parable for race relations at that time. Presley’s performance was strong and sympathetic, and though he was acting, it’s hard to imagine how he could have portrayed that character without an innate understanding of how a people can be oppressed and marginalized based on the color of their skin.

All of that being said, though, let’s take a minute to recognize Presley’s talent as a singer, which lay at the heart of all of the justifiable praise surrounding him as well as the tacky dreck. Or…

…as Jake Hess, the incomparable lead singer for the Statesmen Quartet and one of Elvis’s lifelong influences, pointed out: “Elvis was one of those artists, when he sang a song, he just seemed to live every word of it. There’s other people that have a voice that’s maybe as great or greater than Presley’s, but he had that certain something that everybody searches for all during their lifetime.”

So, here’s to “Hound Dog Man,” as referred to in a song about him by friend Roy Orbison. And how fine a tribute it would be to dispel racist rumors about him once and for all.
Posted by doomsy at 9:41 AM