The Toll Of Ferris Stupidity 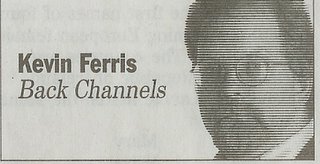 I’m not surprised that Kevin Ferris of the Philadelphia Inquirer is as clueless regarding the issue of funding for regional mass transit and road repair as he is regarding the Iraq war.

This column purports to be an intelligent argument against the installation of tolls only on route I-80 in PA, as mentioned in this prior post. I say “purports to be” because, immediately after Ferris tells us that the tolls are advocated by Gov. Ed Rendell and State Sen. Vince Fumo, Ferris, under the flimsiest of pretexts, immediately launches into a recitation of the charges against Fumo for mail fraud, conspiracy, obstruction of justice, and other charges, as if that has anything whatsoever to do with the issue.

The importance of a serious discussion about raising funds for infrastructure repair, including highways and methods of mass transit, must be clear even to Ferris in light of the Minnesota bridge disaster that I noted in the August 3rd post. The bill for the “free lunch” promised by the “government-is-the-enemy-and-we-have-to-drown-it-in-the-bathtub” Repugs is coming due at long last.

In today’s Ferris screed, he portrays Repug state congressmen Phil English and John Peterson sympathetically for their obstructionism regarding the toll booths on I-80, but fails to note the following (from 8/3)…

Sen. Joe Scarnati, the state Senate’s president pro tempore from Jefferson County, said in a statement that the (toll) money was badly needed to fix nearly 6,000 bridges that are structurally deficient and 9,000 miles of road in poor condition.

And he blamed U.S. Reps. Phil English and John Peterson for failing to secure enough federal transportation dollars for Pennsylvania.

Also, as noted in an Inquirer story from June 17th, the state legislature doesn’t permit SEPTA to obtain funding any other way than to seek it from Harrisburg, which makes it sadly unique among other mass transit agencies in this country (though typical for PA, however)…

In Pennsylvania, the state prevents regional transit agencies and local governments from raising money in many of the ways used by their counterparts elsewhere.

Colorado and Georgia provide none of the money to operate Denver's and Atlanta's mass transit. Instead, they authorize local sales taxes, approved by local voters.

So what is the brilliant idea Ferris has for funding mass transit and our roads?

Well, assuming you can take Ferris seriously here (a big assumption), he’s proposing a flat fee of $5 per carload for commuters using I-95, the Schuylkill Expressway (76), and Route 476 (for “the cost of a mocha-latte-something-something,” as he puts it – he also has some other snarky suggestions which should have been removed by his editor, assuming he even has one, before this nonsense saw its way into online type).

And how’s this for more than a little bit of demagoguery (as to his rationale for bringing the toll booths down here even though the stretches of road aren’t as long as upstate, probably about 100 that could be tolled here as opposed to 300 on I-80 and related interstates, which Ferris actually acknowledges)?

(Southeastern PA) is loaded with folks who for years have bemoaned the Bush tax cuts but never found a way to send their family's share back to the government. They'll welcome these state fund-raising efforts.

Well, for the reality-based perspective, this was noted in a Philadelphia Inquirer editorial from about a week ago…

For too long, state and federal governments have neglected bridge repairs. Pennsylvania has nearly 6,000 deficient bridges (as noted earlier); New Jersey has about 750. Nationwide, there are more than 70,000 structurally deficient bridges. Repairing them will cost more than $9 billion per year for the next 20 years.

The usual non-constructive Repug BS as a response to a problem that requires government to do something, of course. If we’re going to need $9 billion to fix our bridges, we’d better start figuring out a way to obtain funding ASAP (aside from slamming a lid on the black hole of funding for Dubya’s excellent Iraq adventure, which would redirect money big time to the need Oberstar has identified, among others…are you reading this, Harry Reid, for whom my respect is falling by the minute?).

But I guess that represents too many “mocha-latte-something-somethings” for Ferris.

Well, he should be able to buy at least one for a lady named Melissa Hughes; he could learn more about her here. But when she finds out that Ferris is highly sympathetic to Repugs whose obstructionism and inaction had a lot to do with the disaster that almost killed her, he had better be prepared if she tosses it back into his face.

Update 10/5: This tells us that Joseph G. Brimmeier, CEO of the Pennsylvania Turnpike Commission, has decided not to use any toll revenue in support of mass transit in PA.

That’s isn’t going to mitigate the fury of those who oppose the tolls, and it certainly isn’t going to make Brimmeier any friends among those who want to fund SEPTA to the point where it can provide a reliable mass transit alternative to commuting on our crumbling roads and bridges.

So Brimmeier had two targets to aim at, and he missed both of them.