No Way On The WSJ, Tierney 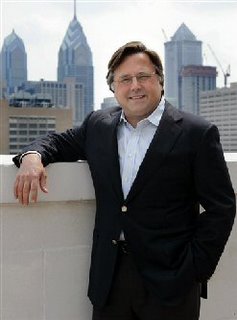 It’s truly funny to me that Brian Tierney thinks he, along with some alleged consortium of unnamed “players,” has any chance whatsoever of competing to purchase Dow Jones & Co., the parent company of the Wall Street Journal, especially with Rupert Murdoch in the picture (blogging is slowly wheezing to a halt for a little while, but I have to contribute my two cents here as they say).

Tierney seems to be playing his supposed turnaround in the Inquirer’s abysmal circulation woes (trumpeted in his juvenile “When Pigs Fly” ad campaign) for all it’s worth, even though the up tick was a blip by comparison to a relentless downward slide. I’ll wait for another month or two of circulation numbers, maybe even into the fall, before I pass judgment on whether or not Tierney’s relentless effort to dumb down the Inky and fill it with conservative talking points ends up increasing its readership.

So, aside from self-promotion (which Tierney is good at) and reasons of vanity, why would he consider a venture like this? As noted in the Forbes story...

'I don't believe News Corp (Murdoch) is overpaying. Dow Jones is one of the world's great journalistic enterprises,' Tierney, CEO of Philadelphia Media Holdings, said in an interview.

“If there was an explicit process”? Is Tierney waiting for a handwritten RFP from the Bancroft family on this?

And I think the quote above from Tierney is revelatory; news is a “brand” to him, as if we were talking about deodorant, breakfast cereal or automotive repair tools (and I realize that thinking is commonplace, but it can be repugnant in its triviality).

So why exactly is Dow Jones a target for takeover now? I thought this column by business writer Bill Sloan of the Washington Post was pretty good, particularly this excerpt…

…although journalistic coups and strict attention to journalistic ethics are what have attracted the Journal's audience and built its brand value, the paper itself isn't all that good a business anymore. The Journal was fat, happy and nicely profitable in the latter days of the 1990s stock-market bubble, as evanescent companies flush with money raised in the stock market bought ads right and left. As did the Wall Street houses that floated those bubblicious issues. When the bubble vaporized, so did the ads. Even though the broad stock market has recovered from the bust, the Journal's ads still languish well below their highs. They're unlikely ever to be what they were, given the fragmenting world of national advertising that has affected many mainstream national print publications, including my employer, Newsweek.

One reason Dow Jones is so vulnerable to being taken over is that its cash cow -- the electronic data distribution business -- is threatened by the pending merger of Reuters and Thomson. Combine that prospect with the Journal's profitability problems, and you see why Dow Jones is toast -- at least financially.

Here’s something else to consider; I can’t imagine that even a man as wealthy as Tierney couldn’t make this kind of a play without assistance from Bruce Toll, and the latter’s company has taken a big hit this year as the housing sector of our economy has hit a downturn as well.

And as for the Journal’s content, I have no doubt that Tierney would continue to enthusiastically tow the conservative line in both editorial policy and advertising, as well as trying to bury stories that make the regime currently in power look like the incompetent bunglers that they are (and likely continue to grant a forum for politicians sharing his particular view of the world).

Despite this move by Tierney which seems quixotic at best to me, it will be interesting to see him get weeded out of competition by Murdoch, who (I grudgingly have to admit) often finds a way to get what he wants in these matters.

But is it too much to dream that, as a consolidation prize to Tierney for spunk and nothing more in taking his shot, Murdoch would take pity on him and award a new writing gig at the Journal to one of the Inky’s opinion columnists, thus slightly shrinking the amount of literary drivel from that sorry group by one? Ferris, Last, Smerky…I’m not fussy (and if you want me to throw in an apology for trying to get you thrown out of the country, I’ll consider it in the negotiation).
Posted by doomsy at 2:31 PM