Pay Her Out In Coin She Knows Of 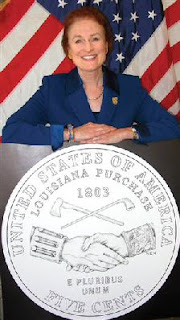 (I know that’s kind of an artsy post title – a line uttered by Captain Vere played by Pete Ustinov in “Billy Budd,” the movie Ustinov also directed…a great one if you’re able to watch it, with an incredibly young Terence Stamp in his film debut, and Robert Ryan menacing as Sergeant-At-Arms John Claggart.)

I’ll admit that this is a strange way to lead into a post on Henrietta Holsman Fore, who (as noted here) was nominated by Dubya to take over as administrator of the U.S. Agency for International Development, to replace Randall Tobias who resigned after his name was linked to an escort service (thereby ensuring the place of Tobias in Porter Goss Land, a place where, if you're an operative of this administration, you apparently disappear from the sight of the beltway media if you do something wrong).

In the last 1½ years, she has reduced the time it takes for a coin to be produced — from the time the raw material comes in until the final product is shipped — to 62 days, down 80% from April 2002.

The Mint in her tenure has cut coin production costs by 20%, and the agency has continued to make money, returning more than $1 billion to the U.S. Treasury last fiscal year.

"Having outside business eyes look at the operation can be very helpful," says Fore, the first business person to head the agency. "We're looking at private industry models and seeing what we can learn from them."

Ah yes, the beauty of private industry as opposed to that bad, corrupt, inefficient government again. What a marvel this woman is, right?

Well, perhaps. However, there is this itsy bitsy, teeny weenie, nagging little matter as noted in this Toledo (Ohio) Blade article, involving the infamous Tom Noe…

In the months before (Noe) came under scrutiny for his state-funded rare-coin venture, he used a federal appointment to forge relationships with U.S. Mint officials that opened doors for him on Capitol Hill, documents obtained by The Blade show.

Mr. Noe’s quest to become a Washington power broker and to help redesign all U.S. coins fell apart (in 2005) when controversy gripped the $50 million rare-coin investment he managed for the Ohio Bureau of Workers’ Compensation and federal authorities announced they were investigating the GOP fund-raiser for allegedly laundering political contributions to President Bush’s campaign.

So who helped Noe along the way?

In May, 2003, the White House and House Speaker Dennis Hastert recommended that Mr. Noe get a seat on the influential 11-member (Citizens Coinage Advisory) committee. Treasury Secretary John Snow appointed Mr. Noe, less than six months after the Toledo-area coin dealer expressed interest in joining a Mint committee to Henrietta Fore, then director of the Mint.

“I have always had interest in getting more involved on the national level,” Mr. Noe wrote to Ms. Fore.

Mr. Noe’s appointment and eventual chairmanship of the (committee) enabled him to expand his reach into the federal government, according to more than 2,700 pages of e-mails and other committee records released last week by the Mint to The Blade. The newspaper filed a Freedom of Information Act request for the public records in June, 2005.

And as noted here from Wikipedia…

On November 20, 2006, Thomas Noe was given an 18-year sentence, to be served after the 27-month federal sentence imposed in September, fined $213,000, "ordered to pay the cost of the prosecution, estimated at nearly $3 million, and ordered to pay restitution to the Ohio Bureau of Workers’ Compensation for the money missing from the rare-coin fund, estimated at $13.7 million."

So it sounds to me like John Snow, Madelyn Simmons Marchessault and Henrietta Fore may have aided and abetted a felon.

So what has Ms. Fore to say for herself about this? As noted in the Blade story from April 2006…

“Since it is an issue before the courts, under investigation, at this point we at the State Department and our officials aren’t in a position to comment,” said Adam Ereli, a spokesman for the department. “What we can say is that we know Henrietta Fore and Ms. Simmons [Marchessault] to be upstanding public servants of the highest integrity.”

Well, the issue is no longer before the courts. And before giving some eyewash of a confirmation to Ms. Fore, the Senate should grill her on her possible involvement with Noe.

And any pleas of ignorance from her, should they be forthcoming (so typical for this bunch, after all), should be treated as nothing but chump change.

Oh, and in the category of Bushco Flunky Screwups, here’s the story of more lost computer data, this time from the TSA (remember the VA mess from awhile back?).
Posted by doomsy at 12:35 PM

Thanks very much - I appreciate it.

I recently came accross your blog and have been reading along. I thought I would leave my first comment. I dont know what to say except that I have enjoyed reading. Nice blog. I will keep visiting this blog very often.

I've known Madelyn for 30+ years' and she would never do anything underhanded.
Crooks take advantage of honest people and that is what happened here