A Trail of 8th District Ooze 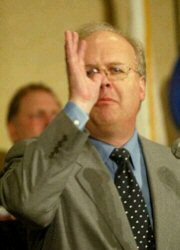 (Maybe Blogger will keep from crashing again long enough for me to finish this post...by the way, John Kerry is going to appear for Patrick today at Bucks County Community College in Newtown, Pa. - see murphy06.net for details.)

As I arrived home from work late tonight, I walked up the driveway to my house and accidentally stepped on something that was kind of firm under the sole of my shoe. Since there were downed tree branches nearby, I thought it was a twig.

When I realized I couldn't flick it off, I soon found out that it was kind of firm and gushy, sticking to my thumb and forefinger a bit as I pried it off, leaving an oily coating on my hand. It turned out that what I had stepped on was a slug.

It turned out to be an appropriate harbinger when I entered our home, took off my shoes, and flipped through the pile of bills on the dining room table. It was then that I saw a glossy mailer with a red background and bold white type. Almost immediately after that I noticed that the mailer had a picture of Patrick Murphy looking a bit confused, and the sick feeling I felt instantaneously after that told me that this had invaded our house from the National Republican Campaign Committee.

On one side is a photo of a forlorn family, and on the other side under Patrick's photo is that of a little girl, arms folded under her chin with a spiteful look on her face next to the bold type that says, "Vote No for Patrick Murphy. He's not looking out for our families."

Here is the scurrilous text:

"With the rising costs of raising children in our state, Pennsylvanians can use all the help they can get. The recent federal tax relief included a doubling of the child tax credit. This has enabled parents to keep more of their hard-earned incomes - so they can better clothe, feed and enrich the lives of their children. In times like these, it's help we can all use."

Now comes the shot in the gut:

"Patrick Murphy's Law #5: You got kids, you got problems."

I shudder to think what lies are being told in #1 through #4, by the way, and I'm sure a mountain of this crap from these vermin awaits until November 7th.

And what exactly is Patrick guilty of, I wonder?

"Patrick Murphy has publicly criticized the tax cuts which have brought this much needed relief to the families in our state (The Intelligencer, 2/9/06). Apparently, under Patrick Murphy's law, the tax cuts should not be made permanent. If the tax cuts expire, it will cut the child tax credit in half for Pennsylvania families!" (the last sentence was highlighted in yellow, by the way).

"Patrick Murphy seems to believe the government needs the money more than our children do."

Ah yes, it's that bad "government's" fault, right? Well, I think this is an opportunity to link to what Mark Shields said about government a few years ago for some actual, real-world perspective as opposed to Repug propaganda.

I should note that I was unable to track down the reference in the Doylestown Intelligencer which states that tax cuts "have brought much-needed relief to the families in our state," so I can't comment on that, though I know speaking only for myself, I saw a check for $400 for the first tax cut after Dubya took over and NOTHING after that, while the investor class has ended up consolidating their wealth beyond anyone's wildest dreams.

And by the way, the "our" references in this mailer (implying this originated from Pennsylvania somewhere) is yet another lie. Here is where this mailer came from:

And as far as the child tax credit under Bush is concerned, Paul Krugman (the noted economist from Princeton University and the New York Times) notes the following here:

"...the 2001 tax cut included a $400 child credit and also created a new 10 percent tax bracket, the so-called cutout. These measures had the effect of creating a ''sweet spot'' that could be exploited for political purposes. If a couple had multiple children, if the children were all still under 18 and if the couple's income was just high enough to allow it to take full advantage of the child credit, it could get a tax cut of as much as 4 percent of pretax income. Hence the couple with two children and an income of $40,000, receiving a tax cut of $1,600, who played such a large role in the administration's rhetoric. But while most couples have children, at any given time only a small minority of families contains two or more children under 18 -- and many of these families have income too low to take full advantage of the child tax credit. So that ''typical'' family wasn't typical at all. Last year, the actual tax break for families in the middle of the income distribution averaged $469, not $1,600."

And what about the wealthy and tax cuts anyway? Well, as Krugman also notes in the same paragraph:

"David Stockman (former budget director for Ronald Reagan) famously admitted that Reagan's middle-class tax cuts were a 'Trojan horse' that allowed him to smuggle in what he really wanted, a cut in the top marginal rate. The Bush administration similarly follows a Trojan horse strategy, but an even cleverer one. The core measures in Bush's tax cuts benefit only the wealthy, but there are additional features that provide significant benefits to some -- but only some -- middle-class families (which Krugman notes in the paragraph I cited above)."

Here is what the Repugs know but don't want to talk about: what really bites into our paychecks are inflation and energy costs (which are related), and payroll taxes. According to what I read, inflation rears its ugly head when energy prices go up, thus raising the price of anything dependent on energy (which is basically everything in the world, and this usually occurs right at the beginning of the summer travel season...what a coincidence, right?), but when energy costs go down, inflation is abated somewhat (of course, wages are depressed by offshoring and raises - if you're lucky enough to even get one - don't keep up with inflation anyway, but that's another story).

As I noted here, Mike Fitzpatrick had a chance to do something about energy costs, but he took a mulligan, as it were. And as far as payroll taxes are concerned, Patrick provided some interesting information on Mikey's position here.

Concerning our actual wages, Mike Fitzpatrick had a chance to help pass national minimum wage legislation, but he gutted it by trying to help sneak in another estate tax cut for the rich (to say nothing of the fact that he didn't help with rising health care costs either).

That's about all of the analysis of this NRCC garbage that I care to perform for now. It is total propaganda meant only to dupe people into supporting the tax cuts so near and dear to Repug guru Grover Norquist, among others, who want to shrink government "to the point where you can drown it in a bathtub," and who equates bipartisanship with "date rape."

These people truly are scum.

So I would only ask that you brace yourself for an onslaught of this crud, and remember that, as far as issues go, first and foremost, "it's the war, stupid" (and as I type this, Mikey STILL has no plan, and neither does his precious Iraq study group - I think it's safe to assume that this is the main reason why Chris Bowers of MyDD, who is generally spot on concerning these matters, once rated the PA-08 race as "skewing Republican" but now rates it "a toss up").

And by the way, if you want to know Patrick Murphy's position on the economy and family issues, click this link and read what he has to say.

So arm yourselves with the knowledge that, when you vote on November 7th, one candidate will stand with us to change the politics of poison in Washington, D.C. and represent us and on the issues that truly matter, and another will hide behind "swift-boating" garbage and mailers full of lies on the "bread and butter" needs and concerns that affect our families every day.

That should make it easy to pull the lever and touch the screen for the right candidate.

And last but not least, when you're walking to the polling station, watch out for the slugs.
Posted by doomsy at 5:45 AM