Yes, We Still Have Elections 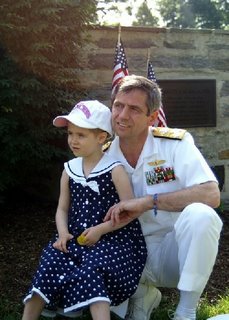 Also, for you fine folks in the 7th district supporting Admiral Joe, here are some events to mark on your calendar:

End of Quarter Party -- Saturday, September 30. The Sestak campaign will be celebrating the end of a successful third quarter with close friends and supporters with a pot luck dinner at The Paint Store, 301 E. Baltimore Pike, Media, PA 19063. The fun begins at 6:30 p.m., please bring a dish to share or $25.

And as for Patrick, here are more letters from the Bucks County Courier Times (this is the latest polling information I have - let's keep closing that gap!).

Does Mike Fitzpatrick believe that the ends justifies the means? When questioned about his reckless spending and supporting bills that included "pork barrel" spending (e.g., teapot museums, aquariums and swimming pools), he indicated that he did so in order to get funding for some local transportation projects attached to these bills. He said, "All these projects are important to the district and these are the projects that the local officials asked that I go to Washington to fight for."

So it is OK to waste taxpayers money in order to keep "local officials" happy. What about the struggling families in the district? Our personal property taxes have increased 45 percent while Mr. Fitzpatrick has been in office. As a small business owner, our health care premiums increase 17 percent every year. Our students have had $12.7 billion dollars cut from the student loan program. Our soldiers do not have the proper body armor and tools they need while serving their country in Iraq. Reckless spending and a growing deficit have to be addressed as part of the upcoming election.

Murphy said, "I believe that Israel has not only the right, but the obligation to defend itself...Israel is our greatest democratic ally in the Middle East, we need to maintain that...special relationship with Israel."

Discussion of an immediate strike by Israel against Iran (four days before the anticipated cease fire in Lebanon) revealed a stark difference between Murphy, a United States Army captain and paratrooper in the Iraq War, and Mike Fitzpatrick, a career politician who has never worn the uniform. Where war is concerned, Murphy is thoughtful, calm and realistic. Fitzpatrick, alarmingly, would charge into war without consideration of facts on the ground or long-term consequences. Haven't we learned from our mistakes?

Murphy stood with Israel at the Stand With Israel rally at Shir Ami last month as many were condemning Israel. As an American Jew, a Zionist and fiercely pro-Israel, I support Patrick Murphy for Congress.

What we can do this fall is change control of Congress so that at least in the next two years oversight can be implemented.

Replacement of our current Sen. Rick Santorum, who has consistently supported Bush on the mess in Iraq, will be a step in the right direction. So I urge a vote for Bob Casey in November.

In addition, in those swing congressional districts, it is crucial that Democrats replace Republicans. We live in one of those districts and I urge that voters in Bucks County elect Patrick Murphy to replace Mike Fitzpatrick.

I shudder at the thought of another two years of no oversight under a Republican-controlled Congress.

And as always, to help make that happen by supporting Patrick click here (and click here to contribute - as with Admiral Joe, this is the end of the quarter, so the timing is particularly crucial to help Patrick if you can.)

This unconditional stand for Israel is a huge negative for many progressive voters. It is the primary reason we (Americans) are hated in the region, and they are right to be angry. We back Israel unconditionally through every U.N. Resolution they have violated, but sanction and regime-change Arab nations for their violations. It is a gross hypocrisy--and it all starts here in these elections where candidates are vetted by the Israel lobby, pro-Israel campaign contributors, AIPAC, and others. They have a stranglehold on our elections to insure the billions of American tax dollars and 'unconditional' support keep flowing to Israel.

I basically agree with that, though as someone who I suppose is progressive (I try to be), I will never give “carte blanche” to Israel. One of the many problems with the Bush administration is that, for political purposes, they essentially let Israel do anything they want because that drives a wedge between American Jews and the Democratic Party. Yes, I can see that Israel is the country most sympathetic to us in that region and we should be that way also to a point (and we should support its right to exist and defend itself within reason), but that doesn’t mean we should look the other way concerning their transgressions either (the problem is that the minute you say anything negative about Israel, 20 people are waiting to jump down your throat, especially now).

I’ve tried to be even handed here on the issue of Israel vs. Hezbollah, though I suppose some would take exception, and I readily admit that I’m not an expert. However, I believe past administrations have treated our relationship with Israel more cautiously than our current bunch (I don’t think the word “caution” exists in their vocabulary, to be honest).