We Can't See The NIE 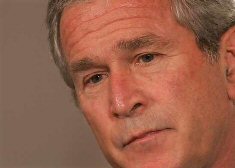 (Not the whole thing anyway – the initials stand for the National Intelligence Estimate on terrorism and al Qaeda in particular.)

So, upon reviewing selected excerpts from the estimate, Congressman Mike Fitzpatrick had this to say (no link yet on the story from the Courier Times web site):

While Fitzpatrick said the report has “many conclusions,” he called portions of the report that were leaked to the New York Times “selected and politically motivated leaks.”

Uh, Mikey, your boss (pictured) refused to declassify the estimate and only selected portions were released by Director of National Security John Negroponte (who is a liar going back to the Iran-Contra fiasco, which makes him a perfect fit for the Bush administration). If that isn’t politically motivated, I don’t know what is.

Also, House Minority Leader Nancy Pelosi asked to convene a behind-closed-doors meeting of all House members to discuss the entire intelligence analysis. As you may imagine, Pelosi’s requested was defeated, with Mikey casting a vote against it (this is in the story also – I’ll keep looking for a link).

This report, by the way, was issued by all 16 of our intelligence agencies (with the blessing of CIA director Michael Hayden also), though the White House “strongly disagrees with it.”

And by the way, as noted from this SourceWatch link by Josh Marshall,

"We know that the Bush administration specifically resisted calling for an NIE until very late in the game because it didn't want the results and findings getting in the way of the policy the administration had already decided on. The reason an NIE was finally pulled together is that Senate Democrats wanted some sense of what the evidence was for all the White House's claims about Iraqi WMD and ties to international terrorism."

Just remember that we’re safer now as a result of the Iraq war, so of course we don’t need to see the NIE.