A Most Awful Intrusion 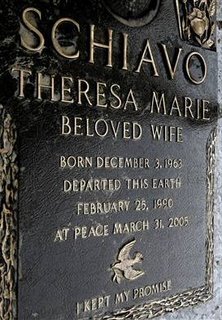 By the way, I searched my archives a few minutes ago and found more reasons not to vote for Mike Fitzpatrick, and I'll elaborate on one in particular in a minute (sorry for not including those reasons yesterday - I honestly thought I had everything). But for now (from 4/19/05)...

In the short period of time in which Mike Fitzpatrick has represented the 8th district in the U.S. House of Representatives, he has quickly endeared himself to his conservative Republican leadership by voting for the following:

· House Congressional Resolution 95, which approves the Bush budget and sets federal spending and revenues for the next five years; this includes a continuance of the Republican tax cuts through 2010 and a projected budget deficit of $376 billion for 2006.

· House Bill S686, otherwise known as the Terri Schiavo Act, in which Congress intervened on a legal matter in the state of Florida by granting jurisdiction to the U.S. District Court in that state to hear her case and render judgment.

Also, regarding the Social Security scam the Republicans are foisting on us, Fitzpatrick told me that he "will not support, and will actively oppose, any proposed reform to Social Security that will change the benefits received by today's retirees or those nearing retirement." With all due respect to upcoming retirees, Rep. Fitzpatrick, that doesn’t affect me, since my retirement is nowhere in sight.

By the way, regarding the Social Security issue, if the cap on earnings subject to withholding was removed instead of fixed at $90,000, then the entire matter would be resolved, and in addition to ensuring the program’s solvency, the contribution amount required for each participant could actually be reduced. It is interesting to me that no one is seriously discussing this option.

In addition to legislation making it harder for litigants to file class action suits by now mandating that the majority of those suits be heard in federal as opposed to state courts, Rep. Fitzpatrick also voted for HR 975, otherwise known as the so-called Bankruptcy Abuse Act, which now makes it harder for individuals devastated by job loss or a health crisis to file for bankruptcy protection (including individuals with full health coverage).

During the previous election, a group called the Young Conservatives of Pennsylvania all signed a letter asking Senator Rick Santorum to back Mike Fitzpatrick in the 8th Congressional District rather than State Senator Joe Conti (presumably because Conti’s moderation was disagreeable to them). After witnessing Fitzpatrick’s voting record thus far, I can now understand why.

And speaking of the Terri Schiavo fiasco (in which Dr. Bill Frist watched the terminally ill and comatose woman on a T.V. screen and thought he detected signs of life, and in which Florida Sen. Mel Martinez thought he detected "a great political issue"), I should mention that, as reported by the Courier Times today, Michael Schiavo campaigned recently for Patrick Murphy since Patrick stated that “I don’t think the federal government has a place in a private, family matter.”

Congressman Mike Fitzpatrick, on the other hand, called his vote in the Schiavo case a “vote of conscience” and has said, as a father of six children (the Courier Times NEVER misses an opportunity to point that out), he wanted to give Terri Schiavo’s parents the chance to plead for their daughter’s life in federal court.

As some of us can remember, by the time the Schiavo case had made it to the national spotlight, it had already been litigated to death (no pun intended, I promise). And as we now know, Michael Schiavo turned out to be right when he told everyone that his wife was legally blind living in a permanently comatose, vegetative state (though I don’t recall that any of the zealots who fought to keep her feeding tube inserted actually apologized to him).

To take another stroll down memory lane on this (to point out once more how incredibly wrong Mikey was), here is a column from Froma Harrop of the Providence Journal from about a year and a half ago (chiming in on John Bolton and the entire "nuclear option" debate...not referring to North Korea at that time...also).

We should be grateful that circuses no longer have freak shows. Freak shows put legless men, hairy women and others burdened with physical abnormalities on display. The shows were cruel and tasteless affairs.

The spirit of the freak show, however, lives on in Republican politics. The Republican freak show starts with a perfectly valid issue, then twists it into a weird spectacle. Every week, it seems, GOP leaders offer a new curiosity to amaze us.

There was the Terri Schiavo sideshow. No, tragic Terri was not the freak. The stars were the politicians and their supporting cast of barking pundits, religious militants and various hangers-on.

At this very moment, thousands of good Americans are making painful end-of-life decisions -- and for loved ones who haven't spent the last 15 years in a vegetative state. Yet Republican leaders, from President Bush on down, jumped on this one case -- virtually calling Michael Schiavo a murderer for wanting to remove his wife's feeding tube. And just when you thought the performers had no more top to go over, Tom DeLay made his threat against the judges who sided with Michael.

The issue, when to let a patient die, is a real one. But it belongs in a serious bioethical debate. This land of gray areas doesn't do well under the bright colors of the carnival.

Next stop on the fairway is John Bolton. Imagine everything you don't want in an ambassador to the United Nations. Now imagine John Bolton, Bush's nominee. Bolton abuses subordinates. He makes childish remarks about how much he hates the United Nation. And he beats up on intelligence experts whose findings don't go well with his speeches. To liven the act, he keeps a brass hand grenade on his desk.

Now the United Nations is a highly flawed organization. People unsympathetic to American interests pack its halls. We all know that. And we've had tellers-of-hard-truths representing us there before. But the late Sen. Daniel Patrick Moynihan and Jeane Kirkpatrick were masters of wit and verbal finesse. Bolton is the Babbling Boy.

Remember when he signed the document stating America's plan to withdraw from the International Criminal Court? Though it offended some allies, the decision was sound. But Bolton couldn't just sign the paper and keep his mouth shut. He had to announce the action as "the happiest moment of my government service."

Step right up, ladies and gents, for "Justice Sunday." Republican leaders apparently thought that the Christian Sabbath would provide a nice tie-in for some politicking. So Senate Majority Leader Bill Frist made a curious telecast to select churches and beyond. He said that Democrats were "against people of faith" and that he wanted "more civility in public life."

Frist's idea of "civility" includes detonating the "nuclear option" in the U.S. Senate. The mission is to level the filibuster rule, which has been standing for over 200 years. The rule requires 60 of the 100 senators, rather than a simple 51 majority, to approve a judicial nominee.

This checks-and-balances device was designed to protect minority views. When Republicans were in the minority, they liked the rule just fine -- and used it against several of Clinton's nominees for the federal bench.

Never a dull moment for these guys. Note how they juice up their controversies with hints of violence -- threats against judges, hand-grenade props and talk of nuclear options.

You certainly can't fault them for lack of imagination. Not everyone can repackage a dusty Senate rule as a tool of oppression against pious folk.

Like the freak show of old, the political version leaves its audience astounded. But horrified fascination should not be confused with approval of the creepy offerings. The American people broadly panned the Terri Schiavo show, according to polls. And more than half do not appreciate this trumped-up case against the Senate filibuster.

What do the American people want? They want a normal political process. They want some privacy for people making tough medical decisions. They want their diplomats to be diplomatic. They want the last congenial institution on Capitol Hill, the U.S. Senate, to calmly go about its business.

What Americans really want is a freak-show-free week in their national politics. Or, as that great Republican president Warren G. Harding put it, they want a return to "normalcy."

I hope the “Warren Harding” comment was tongue in cheek, since his administration was nearly as corrupt as Bushco. Also, I’m not sure how positive a development it was that the U.S. withdrew itself from the International Criminal Court, but there you have it.
Posted by doomsy at 1:57 PM