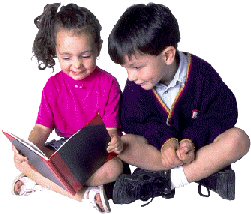 No sooner do I mention in a post yet again that Bushco has done a lousy job appointing administrators for key government agencies then I come across this item.

It seems “a scorching internal review” revealed that Reading First, which is supposed to be a “jewel” (oh brother) of Dubya’s Every Child Left Behind program, was being mismanaged through dealing with preferred vendors in arrangements reeking with conflict of interest, as well as “violations of the law and ethical standards.”

As noted in the story...

The (internal review) found the department:

_Botched the way it picked a panel to review grant applications, raising questions over whether grants were approved as the law requires.

_Screened grant reviewers for conflicts of interest, but then failed to identify six who had a clear conflict based on their industry connections.

_Did not let states see the comments of experts who reviewed their applications.

_Required states to meet conditions that weren't part of the law.

_Tried to downplay elements of the law it didn't like when working with states.

(For more “golden moments” with Margaret Spellings, by the way, click here and here.)

Later on in the story, we read about the giddy Emails from program director Chris Doherty to his cronies who were all fat, dumb and happy over the fact that funds were directed to states that favored something called Direct Instruction (which I guess is a vendor Doherty worked with), while DI people served on the panel overseeing the program. And about the only thing I can do when I read about Spellings’ indignation over the fact that the Emails were made public is laugh.

I don’t know about you, but I detected at least two characteristics that are part of Bushco’s typical way of doing business. One is the “fox guarding the henhouse” mentality of program administration pursuant to our tax dollars put to work (and badly at that). Another is the almost adolescent sense of delight people like Doherty communicate as they willfully disregard what is plainly their duty to run these programs on behalf of their constituents (even worse in this case because we’re talking about the kids).

So what else does Spellings have to say about this?

Spellings, who became secretary in 2005, said she is not aware of any effort to favor certain reading programs. That, however, is just what the audit says has happened.

"I'm doing everything I can at this point," she said. "I can't undo what's been done."

Actually, that’s not true, Mrs. Spellings. You haven’t done everything yet; I’m still waiting for your resignation.
Posted by doomsy at 2:54 PM