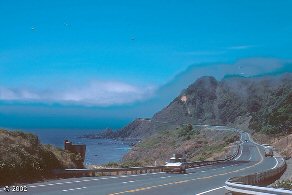 Fifty years ago today, President Dwight D. Eisenhower signed the Federal-Aid Highway Act, and here is some background on that from USA Today founder Al Neuharth.

And, as noted from this link...

President Eisenhower vigorously campaigned for a safe, fast, interlocking system of highways that would connect cities but be free of cross traffic and signal lights. In 1954, Vice President Richard Nixon read Eisenhower's proposal to Congress, because the president was away at a family funeral.

"Let us look at the highway net of the United States as it is," Nixon told Congress in 1954. "It is obsolete because in large part it just happened. It was governed in the beginning by terrain, existing Indian trails, cattle trails, and arbitrary section lines. It was designed largely for local movement in an age of transcontinental travel. Every year there's a wastage of billions of hours in detours, traffic jams, and so on, amounting to billions of dollars in productive time.

As a solution, President Eisenhower proposed a $50 billion highway program to be completed in just ten years. As it turned out, the final piece of the system as planned and funded -- an astounding tunnel and bridge project called The Big Dig in Boston -- opened in 2004 -- 50 years, not ten, after the Nixon speech.

I think it’s important to note, though, that there is a cost to the freedom we’ve enjoyed, spending untold amounts on money on road repair and vehicle maintenance at the expense of greater mass transit funding (though, to be honest, I enjoy rolling down the windows while doing upwards of 70-75 on my way down the Atlantic City Expressway as much as anybody). As noted here:

…Not everyone thinks the changes brought on by the interstate system were good. By easing long trips, the interstates opened up development away from core urban areas, creating sprawl.

The interstate system "has devastated our cities," said John Holtzclaw of the Sierra Club. "The unintended consequences of this experiment in social engineering are towns so spread out and inconvenient that residents are forced to drive, even if for only a loaf of bread or bottle of milk."

This link takes you to a detailed account of issues such as sprawl and congestion that have arisen partly due to our interstate highway system and how communities around the country are addressing these issues.

I don’t have a copy of Buzz’s Bissinger’s landmark book, “A Prayer For The City” available at the moment, but I can vividly recall his description of how transportation policy in the 1950s was geared towards industrial and residential expansion into the suburbs, and this affected the decline of our cities. This was aided in no small part by Eisenhower’s highway bill, though to be honest, the status quo at that time was unacceptable, as Nixon pointed out in his speech. And as I said, the freedom of driving down the highway something totally ingrained in our culture.

So for now, let’s offer some thanks for this to Ike, and wind it up and blow it out one more time as we scream on down the blacktop into the sunset.
Posted by doomsy at 1:09 PM