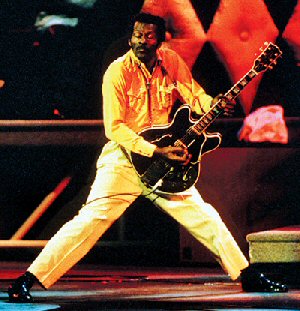 As noted here, the 20th anniversary DVD release of the concert film, “Hail! Hail! Rock N’ Roll” took place this week (the concert upon which the film was based was conceived as a celebration of Berry’s 60th birthday). The film was a documentary of two concerts performed to honor Chuck Berry and his music, complete with a wide array of guest musicians.

However, the film, directed by Taylor Hackford (of “An Officer And A Gentleman,” containing possibly the only movie performance, aside from “Chicago,” that I could ever tolerate by Richard Gere) is unlike other concert films in that it captures its subject, Berry, warts and all. There are frequent arguments onscreen with Keith Richards of the Rolling Stones, who organized the concert and led the musicians, as well as with Hackford and others off screen.

As I saw the stories about this week’s DVD release, I was reminded of an excellent book on Berry that I read some time ago called, “Brown Eyed Handsome Man” by Bruce Pegg. It is an unauthorized biography, but it is an eminently fair, meticulous and respectful work about Berry and those in his very small inner circle, including the late pianist Johnnie Johnson whose great musicianship accompanied Berry’s legendary standards.

As Pegg recalled in his book… 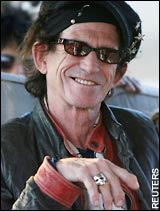 Keith Richards’s reaction on encountering Chuck Berry at his home for the first time was…something of a shock. Arriving in Wentzville, MO (the location of Berry Park, the musician’s home and office complex which served as his personal retreat)…Richards was surprised to find that Berry’s living room contained “two large video screens. One played whatever (Berry) selected. The other ran constant pictures of naked white girls throwing pies at each other and falling over.” A month later, Richards invited Berry to his home in Jamaica, where Berry began to behave “like a fish out of water, flipping around enigmatically. One minute he was enthusiastic and entertaining and the next – poof! – he would withdraw into a stony silence.”

The arguments that took place during filming ranged from Berry’s stance that he should be paid separately for his stage performance and also his role in the film’s production to the level where Berry’s guitar amplifier should be set. Not surprisingly, then, as Mark Slocombe (a production assistant and limo driver) maintained, “over the course of the film…most of the people involved…grew to hate Chuck Berry.”

But Keith Richards, acutely aware of his mentor’s eccentricities, fully understood that this was a manifestation of Berry’s discomfort at the situation unfolding all around him. “I feel sorry for him,” Richards said later. “He’s a very lonely man…After living that secluded one-man show for so many years, he probably wasn’t prepared himself for how he was gonna act.”

There is a wealth of other information in Pegg’s book about the making of the movie, including the fact that Linda Ronstadt appeared to sing “Back In The U.S.A.” in the key of “C”, but Berry onstage changed the key to “G” – a frequent Berry tactic in his never-ending battle to manage the production – and Ronstadt sang the song well, but became so enraged over not knowing about the last-minute change that she stormed off the stage and rode away in her limo, thus only appearing in one of the two filmed concerts. More than that, though, the book provides enormous detail about many areas of Berry’s life, including his seemingly never-ending legal trouble; the book’s timeline actually ends while in the middle of a lawsuit Johnson filed against Berry which was settled before Johnson’s death.

“Hail! Hail! Rock N’ Roll” was a great film, and I plan to go out and pick up the DVD and relive the experience (and enjoy what I hope will be plentiful bonus material) as soon as I can.
Posted by doomsy at 5:51 PM

I saw a commercial for a VH1 special on this band Platinum Weird where Mick Jagger is saying that they’re “the most famous band noone’s ever heard of.” I think they’re some band from the 70s that never released a record or something? check out this clip though
http://www.youtube.com/watch?v=lGvmz32ajao
does anyone know about this?

I found this and I'll try to take a look more later.