The Crooked Norm Of Repug “Reform” 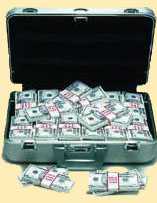 The Bucks County Courier Times quite rightly chastised the PA House of Representatives in an editorial today for passing an extremely watered-down lobbying “reform” bill last week. According to the editorial, the amount of money lobbyists spend on particular legislators will still remain hidden from the public.

As Dave Ralis noted in his blog, State Rep. Greg Vitali of Delaware County was the only person who voted against the bill since his amendment to the bill requiring specifics on who’s paying off who was stripped out of it. As Vitali noted:

“Lobbyists have become not information providers, not educators; they’ve become our friends. They’ve become people who buy us rounds of golf, buy us dinners in the finest restaurants…”

Though the Courier Times did the right thing by drawing attention to this continued “feathering of this foul nest” in Harrisburg, I think it’s important to note that the paper did not identify Perzel or anyone else in the House Repug leadership in doing so. They kept their criticisms in the abstract, attacking the defects of the final bill instead of those responsible for the existence of those defects.

Of course, I know they’ll show no such reticence if Patrick Murphy or some other Democrat does not immediately fall into lockstep with the next Repug scheme that will be unveiled as we approach Election Day in November.
Posted by doomsy at 10:43 AM