No Love In The Sunshine State 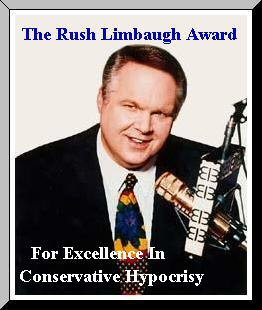 I wonder what will arise next with Flush Limbore? (I know - that was cheap).

Don't you just love how people who think they're better than everybody else think they live by another set of rules? I mean, if I'm leaving the country with a scrip, I'd better make damn sure it has my name on it somewhere, along with the ID of the drug ("Privacy concerns?" Nice legal trick, Mr. "America Trusts Rush"!).

And who knew that OxyContin, and possibly Hydrocodone and Xanax, could be a gateway to (horrors!) Viagra?

I was thinking of giving this clown a pass until I actually went to his home page and saw that he was trying to smear PA Representative Jack Murtha with some innuendo about ABSCAM, and the obligatory freeper ridicule of Al Gore for pointing out what is patently obvious to anyone with reasonably functioning brain matter; namely, that man-made greenhouse gasses are slowly extinguishing human life on this planet.

Of course, Murtha never actually took the money, but what do trivial things like facts matter to Dr. Feelgood?

I'm sure Donovan McNabb of the Eagles is too classy of an individual to revel in Limbaugh's misfortune, given Flush's crash-and-burn episode of supposed football analysis. And I won't say anything else except to point out that both of this supreme egotist's legal run-ins took place in The Land Of Jeb Bush And The Cartoon Rodent, so maybe he'd better take another route home the next time he goes looking for hookers in the Dominican Republic.
Posted by doomsy at 8:40 PM