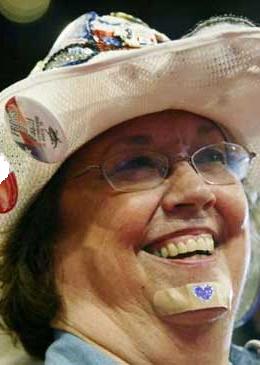 This link takes you to a post and video where Bruce Springsteen took on CNN’s Soledad O’Brien and her leading questions about the Boss’s politics and support of John Kerry in 2004 (nice work by the pride of Long Branch, N.J.).

This made me wonder how we got to where we are in terms of the total “dumbing down” of what passes for political dialogue in this country and the impulse primarily by the right to tell those who disagree with them to sit down and shut up while they decide to completely own the conversation. Really, why should anyone be asking Bruce or anyone else whether they should be speaking their mind? Isn’t that the duty of everyone in this country if they have an opinion? And as a commenter to the ThinkProgress post noted, why is it somehow controversial if a Democrat/progressive/liberal voices his or her opinion, but people like Toby Keith, Faith Hill and Tim McGraw can express their opinion and that’s OK?

Is all of this because our media companies have utterly failed to allow for an alternative point of view other than that which they consider the prevailing wisdom? You and I both know the answer to that question, but I’m asking it anyway to lead into something.

The founder of the network where O’Brien now takes up space, Ted Turner, wrote this column for Washington Monthly nearly two years ago about his experiences founding the network and the reasons why it would be absolutely impossible to do that now. Among his many insights, I thought this was a well-written statement of where we are now, unfortunately.

The loss of independent operators hurts both the media business and its citizen-customers. When the ownership of these firms passes to people under pressure to show quick financial results in order to justify the purchase, the corporate emphasis instantly shifts from taking risks to taking profits. When that happens, quality suffers, localism suffers, and democracy itself suffers.

I would also like to point something out that’s been sticking with me for some time, and I’m going to use this post to vent about it (a byproduct of what Turner’s talking about, I believe). I’m prompted to address this because of the idiot in the photo I’ve attached to this post; this person is apparently proud of herself for mocking John Kerry’s military service with her cutesy little “purple heart” band aid appearing on her chin during the Republican National Hatefest in New York City in 2004.

The typical argument that gets thrown back at democrats/liberals/progressives primarily by red staters is that we act as if we’re smarter than most supporters of the Bush regime and the Repug leadership in Congress (and on all levels of government in this country). This is at the heart of the supposedly rampant “effete, holier-than-thou” liberalism that, to the minds of the red staters, is the biggest threat facing this country.

Well, guess what? If I make a point of reading The Philadelphia Inquirer, The Bucks County Courier Times (even with all of its provincial right-wing nonsense), USA Today from time to time, the New Yorker magazine, excerpts from The New York Times and other newspapers when I can (including the Washington Post and the L.A. Times), and if I also make a point of reading a wide range of blogs and occasional overseas news sites, as well as listening to NPR when I can and trying to watch The Newshour With Jim Lehrer, Charlie Rose on occasion, C-SPAN, or other public affairs programs, while you listen to Limbaugh, Hannity, O’Reilly, Medved, Coulter, or Scarborough (or some new fraud I’m unaware of), read or listen to anything from FOX News and virtually nothing else (and possibly Instapundit, Power Line, Michelle Malkin or Little Green Footballs), then guess what? I AM smarter than you! And I’m not going to apologize for that ONE BIT!

However (and I want to emphasize this as much as I can), it DOES NOT MAKE ME BETTER THAN YOU. It only means that I happen to me MUCH BETTER INFORMED THAN YOU ARE.

I’ve read so many variations of this stupid argument that liberals are supposed to turn into idiots to reach these so-called “value voter” fundamentalist nut jobs that I want to gag. I will never say that I know everything, because I certainly don’t. But chances are if I’m involved with some kind of a dialogue with someone who disagrees with me, inevitably my political orientation and possibly my education (pretty middle-of-the-road in that department, having attended Temple) is going to be brought up as if that’s what we’re really discussing.

Uh, no. If I’m involved in a dialogue, chances are that it’s about a news event or a timely quote from someone to which I agree or disagree. If the discussion isn’t about the facts at hand, then why should I allow it to continue? At that moment, It shouldn’t matter who I am, what I believe, or what I’m doing at the time (and that includes singing a song or being interviewed on cable TV).
Posted by doomsy at 12:13 PM