The Tom And Jesse Show

Now that Tom DeLay has made it official that he is not going to run again for his U.S. House seat representing (using the term loosely) the 22nd district of Texas, I have something in mind for him, since he apparently will need to fill up his time.

Before I do, though, I have to point out DeLay’s typically cute move to disqualify himself from running for reelection, as reported in Time and at The Daily Kos:

The surprise decision was based on the sort of ruthless calculation that had once given him unchallenged dominance of House Republicans and their wealthy friends in Washington's lobbying community: he realized he might lose in this November's election. DeLay got a scare in a Republican primary last month, and a recent poll taken by his campaign gave him a roughly 50-50 shot of winning, in an election season when Republicans need every seat they can hang onto to avoid a Democratic takeover of the House [...]

DeLay said he is likely to leave by the end of May, depending on the Congressional schedule and finishing his work on a couple of issues. He said he will change his legal residence to his condominium in Alexandria, Va., from his modest two-story home on a golf course here in the 22nd District of Texas. "I become ineligible to run for election if I'm not a resident of the state of Texas," he said, turning election law to his purposes for perhaps on last time. State Republican officials will then be able to name another Republican candidate to face Democrat Nick Lampson, a former House members who lost his seat in a redistricting engineered by DeLay.

(I’m sure this goes without saying, but I’ll do so anyway: if you can, please help Nick Lampson.)

Well, then, Tom, since you’ve decided to bail in an effort to keep the House firmly in the grip of the Repugs, I have a suggestion for you.

Why don’t you devote a good portion of your time to taking care of Jesse Helms?

Oh, come on now, Tom. You tell everybody that you’re an evangelical Christian, so quick to pronounce moral judgments on others. And I know that apostolic good works are something that comes naturally for people who actually practice that which you espouse to us every minute you get. So this should be a “slam dunk,” right? 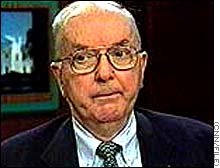 You see, Tom, Jesse is a sick man now. He is no longer the titan of intolerance who held sway over the Senate for years. He no longer holds up key appointments because those who were sent to him by Presidents didn’t sufficiently cower unctuously in his presence. And apparently he’s too addled to engage in race-bating tactics that played well enough with his tiny-brained red state minions to the point where he was sent back to the Senate over and over again.

Based on what I read, he is apparently in the same state as other family members I can recall, and those of friends of ours also. He must need help with tying and buttoning his hospital clothes, wiping slobber and breakfast cereal off his face and cleaning up after performing bathroom functions. And since Jesse is suffering from dementia, I’m sure it is growing more and more difficult for him to have what we would consider a normal conversation, his mind no doubt lost in some antebellum perversion or romanticized Jim Crow fantasies of one type or another.

Besides, Tom, Jesse is one of the founding fathers of what we have come to loathe as the conservative “movement.” He is one of the individuals who saw the potential for wedding unbounded corporate capitalism with white-hot Southern intolerance. He knew that Ronald Reagan could be the champion for such a force, and Jesse was once smart enough to figure out how to pull it off. To put it simply, if it weren’t for Jesse Helms, you probably would still be a bug exterminator.

So this is payback of a sort, Tom. My guess is that if you have any hope whatsoever of obtaining the peace of another world after this one so hoped for by those who you have led astray, you need to put things right, and swallowing a great big slice of humble pie in the form of tending to your mentor like this would be one hell of a good start.
Posted by doomsy at 8:32 AM