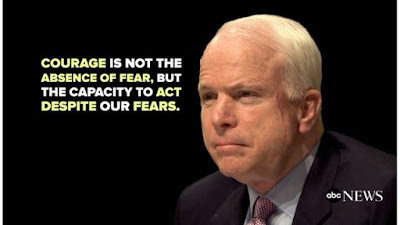 Like many others, I had a lot of disagreements with U.S. Senator John McCain (here), but among his many notable accomplishments, he saved the Affordable Care Law (at least for the time being, despite the garbage being perpetrated against it by Generalissimo Trump and his band of lapdog congressional Republicans). As noted in the clip below, he also spoke out eloquently against torture (with a perspective on this unique to anyone else in public life), and he also worked on campaign finance reform with former Democratic U.S. Senator Russ Feingold.

Oh, and somehow I’m sure you will NEVER, EVER hear a Republican candidate for president or anything else speak so eloquently against his Democratic opponent (again, as noted in the clip) – RIP…

…and Kyle K. tells us about more Drudgico BS about how the Dems should continue looking for that mythical centrist “middle” and stay away from Medicare for All – oh really? How about a 70 percent approval for something that is supposedly unpopular, as noted here (NSFW)?...

…and yes, I’ll admit that these are words and not actions, but coming from Pope Francis, I believe the words matter, though yes, there needs to be more follow-up (on the abuse scandal and the PA grand jury report of course)…

…and in addition to John McCain, RIP to guitarist Ed King of Lynyrd Skynyrd (the subject of another great Showtime documentary).