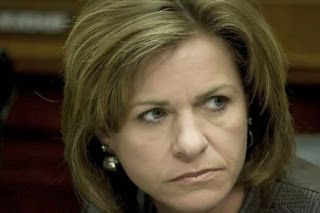 As part of my “tribute” to the U.S. House Repugs and their 52 votes to repeal the Affordable Care Law…

Update 3/28/14: OK, fair is fair...I went back and heard the tape, and I think someone from the crowd yelled out at the mother to "grow up and get health insurance," which is still offensive and ridiculous. I'm not at all sure that Jenkins actually said that (I think she was stupid to not support the ACA, but I honestly couldn't detect patently offensive behavior.)