Time For Jim Bunning To Get "The Hook" 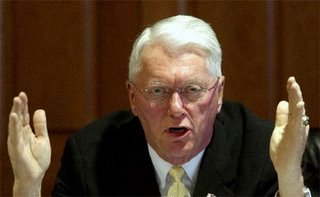 (Note: Baseball parlance for relieving a pitcher from the game, for the uninitiated.)

So let’s review the most recent antics of Senator “High And Tight,” shall we?

And now, I give you Bunning’s latest embarrassment (here – h/t Atrios)…

As Democratic senators asked again and again for unanimous consent for a vote on a 30-day extension Thursday night, Bunning refused to go along.

And as a symptom of our corporate political-media-industrial complex’s almost fetishistic preoccupation with deficit reduction, it should be noted that Bunning supposedly doesn’t object to the extension, but only that it might add to the deficit unless it is paid for with stimulus funds.

(The next time I hear the Bucks County Courier Times Op-Ed page or any other conservative house organ yapping about how deficit reduction is supposedly more important than putting people back to work, I’m going to remember this episode.)

And as Politico/HuffPo report, the Senate has adjourned without acting on the extension.

At this moment, it is harder for me to contemplate a more worthless group of human beings than the U.S. Senate, I must tell you.

And Bunning wanted everyone to know that it was vitally important to him that proceedings end so he can watch a TV sports event.

This senile old fossil would be doing his constituents, to say nothing of the rest of this country, a favor if, after he returned home to watch his precious college basketball game, he decided to stay there and never come back to Washington.

He’s already not running for another term (not that he’d have a snowball’s chance of winning re-election anyway). Find a speck of decency and just quit right now, will you, Senator?
Posted by doomsy at 12:17 PM