The "Revolutionaries" Who Weren't 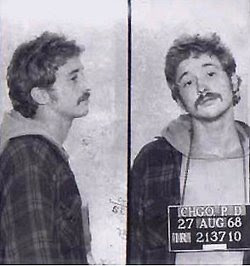 (Referring to the two presidential candidates, just to make that clear - and I also posted over here today.)

I thought this was a very interesting Op-Ed in the New York Times over the weekend; it tells the story of Robert Jordan, the hero in Ernest Hemingway’s novel “For Whom The Bell Tolls” about the involvement of the “Abraham Lincoln Brigade” in the Spanish Civil War, and how the portrayal of Jordan in Hemingway’s legendary work stood at odds with the beliefs of those in this country who actually fought against Francisco Franco in World War II (long before Franco became a punch line in “Saturday Night Live”).

And by the way, Jordan has also emerged as a hero to both Senators Barack Obama and John W. McBush; Obama claimed that “For Whom The Bell Tolls” is “one of the three books that most inspired him.”

As for the other guy…

Mr. McCain begins his 2002 book, “Worth the Fighting For” (a phrase lifted from Jordan’s dying soliloquy), with an extraordinary paean to the character, whom he first encountered at age 12. Having found two four-leaf clovers, young John pulled “For Whom the Bell Tolls” off his father’s bookcase so he could press them. He and Robert have been together ever since, even in Hanoi. “I knew that if he were in the next cell to mine, he would be stoic, he would be strong, he would be tough, he wouldn’t give up,” Mr. McCain said in a radio interview in 2002. “And Robert would expect me to do the same thing.”

And as far as the character of Jordan himself is concerned…

Hemingway never revealed on whom he based Jordan, who taught Spanish at the University of Montana before heading to Spain. Cecil Eby of the University of Michigan proposed Robert Merriman, who, like Jordan, was a Westerner and a teacher (he had studied economics in Moscow). But Merriman, who was killed in 1938, was never a guerrilla behind enemy lines, as Jordan was.

And in the 1943 movie, Jordan is portrayed by the decidedly anti-Communist Gary Cooper (though Jordan, had he been truly emblematic of many of the anti-Franco fighters, could have passed for one – Op-Ed writer David Margolick tells us that most of those who actually fought in the brigade hated Hemingway’s book), with the still-quite-fetching-at-that-point Ingrid Bergman as Jordan’s love interest, Maria.

But it’s a funny thing; when I read about Jordan’s exploits and some of those who fought fascism, I think of neither Obama nor McBush (and Margolick writes that our country never really came to accept those 3,000 or so who fought in the brigade, in particular Ronnie Reagan, who said that they “fought on the wrong side”: that’s actually funny coming from a guy who “served” in WWII stateside because he was nearsighted).

The person I think of is William Ayres (pictured – at least, the guy in the Weather Underground, as opposed to the Distinguished Professor of Education and scholar of the present day)…

As Margolick also tells us…

(Jordan) palled around with terrorists, or at least people whom many Americans, of his era and beyond, so thought. His specialty is blowing things up for a cause. He is at minimum a socialist, someone so eager to spread wealth around that he’d lose his life to do it.

And as for Ayres, Wikipedia tells us…

“The one thing I don't regret is opposing the war in Vietnam with every ounce of my being.... When I say, 'We didn't do enough,' a lot of people rush to think, 'That must mean, "We didn't bomb enough shit."' But that's not the point at all. It's not a tactical statement, it's an obvious political and ethical statement. In this context, 'we' means 'everyone'.”

And before we chuckle self-righteously at what could be viewed as Ayres’ liberal naïveté, I would only submit that we may find ourselves saying the same thing one day about the Iraq war (notwithstanding the bombing, of course).
Posted by doomsy at 1:30 PM