Bad Times Today For Sheldon A. 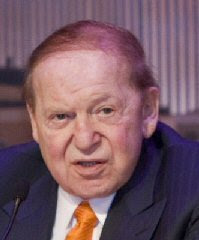 (By the way, I also posted briefly over here.)

Atrios brought up the news this morning that one Sheldon G. Adelson’s casino company, Las Vegas Sands Corp., “fell the most in New York trading since going public after saying it may default on debt and face bankruptcy.”

It couldn’t happen to a nicer guy.

One of the embedded Eschaton links takes you to the New York Times story providing details of Adelson’s association with the cretins of Freedom’s Watch, which is good reporting, but I’d like to “pile on” here, if I may, with more details from this profile of Adelson that appeared in The New Yorker last June.

In the article by writer Connie Bruck, we learn, among other things, that…

Adelson opposed both Olmert and the (Annapolis, MD) peace conference (in November 2006 to discuss, among other things, a two-state Israel-Palestine “solution”). The Zionist Organization of America, to which Adelson is a major contributor, ran a full-page ad in the Times, headlined, “SECRETARY RICE: DON’T PROMOTE A STATE FOR PALESTINIANS WHILE THEIR 10 COMMANDMENTS PROMOTE TERRORISM AND ISRAEL’S DESTRUCTION.” The “10 Commandments” referred to the constitution of Fatah, Abbas’s party. “Osama Bin-Laden and Hamas would be proud of Abbas’ Fatah Constitution,” the ad stated. Two weeks before the start of the conference, a Washington, D.C., think tank that shares office space and several board members with the Republican Jewish Coalition—another organization to which Adelson makes significant contributions—circulated an article on its Listserve which asserted, “(Israeli Prime Minister Ehud) Olmert is now chasing peace with the Palestinians at all costs, in a desperate attempt to secure his place in world history.”

Adelson has long preferred a low profile in many of his political activities. But one of his maneuvers did appear in the press. He has been a generous donor to the American Israel Public Affairs Committee, or AIPAC, the dominant lobby of American Jewry regarding U.S. policy toward Israel. Since the nineties, Adelson has helped underwrite many congressional trips to Israel, sponsored by an AIPAC educational affiliate. (Adelson pays only for Republican members.) Last year, he contributed funds for a lavish new office building in Washington, D.C., for the organization. In November, shortly before the summit, he learned that AIPAC was supporting a congressional letter, signed by more than a hundred and thirty members of the House of Representatives, that urged the Bush Administration to increase economic aid to the Palestinians, an initiative that the government of Israel also supported. Adelson was furious.

When Adelson was merely rich, he wrote checks for causes that he favored and for politicians whom he supported. Occasionally, he demanded to be heard. But he did not expect to play a significant role in U.S. foreign policy, or in Israel’s strategic decisions, or in the fate of a sitting Israeli Prime Minister. That was before he acquired many billions of dollars. (He has assets of twenty-six billion dollars, according to a Forbes list published in March.) His political expenditures and his expectations have increased proportionately. Not long after (an encounter between Adelson and Dubya) last October, an Israeli government representative said that Bush, describing it to another Israeli official, had remarked wryly, “I had this crazy Jewish billionaire, yelling at me.” (The Israeli official does not recall the conversation; the White House said that it had no comment.)

The New Yorker story tells us that Adelson hit it big when he founded the Computer Dealer’s Exposition (or Comdex) in Las Vegas in 1979 before he acquired the Sands Hotel and Casino in 1989, demolishing it in 1996 before construction was finished in The Venetian Hotel and Casino the following year.

Like all major Las Vegas hotel casinos, the Sands was a union hotel when Adelson bought it, but the Venetian was non-union. This sparked a singularly bitter war with the Culinary Union, which had for many years maintained good relations with most hotels on the Strip. (Adelson has said that the benefits he gives his employees are superior to union benefits.) After a rally in which a thousand union supporters picketed in front of the Venetian, Adelson tried to have them removed by the police, and when that failed he went to court, arguing that the sidewalks outside the Venetian were private property, and not subject to the First Amendment. The Venetian lost in the district court and the appellate court, and in 2002 the U.S. Supreme Court refused to hear the case.

And there’s lots more, including…

Testifying before the Nevada state ethics commission in 1998, Shelley Berkley, who is now a Democratic congresswoman for Nevada, and who had worked for Adelson in the nineties as his vice-president of legal and governmental affairs, said that Adelson had told her that “old Democrats were with the union and he wanted to break the back of the union, consequently he had to break the back of the Democrats.” Adelson fired Berkley in 1997, just months before she planned to begin a run for her first term in Congress. In a September, 1998, letter to the Review-Journal, Adelson wrote, “She violated attorney/client privilege and after two warnings, I decided to fire her. . . . Shelley Berkley attacks me in order to draw attention away from her own ethical lapses.” Berkley published a letter in the paper a week later, in response, and she explained her firing differently. “My relationship with him began to sour the moment I urged him to hold jobs open at the Venetian for former Sands workers. The more I encouraged cooperation with the workers, the more I incurred Mr. Adelson’s wrath,” Berkley wrote. “Over time, I observed Mr. Adelson plot vendettas against anyone whom he believed stood in his way. However minuscule the perceived affront, he was certain to go ballistic, using his money and position to bully any ‘opponent’—great or small—into submission. . . . He has funneled hundreds of thousands of dollars to the Republican Party to support his handpicked candidate by attacking me on TV.”

She went on, “I have unique personal knowledge of how Mr. Adelson seeks to dominate politics and public policy through the raw power of money. Shortly before I was fired from the Sands by Mr. Adelson in 1997, he made me an offer. It was a bizarre proposition, but it was simple and it was direct. He told me if I would switch from the Democratic Party to the Republican Party he would provide all the campaign funding I would need to run for Congress.” Berkley won her first race by only three percentage points. In 2006, she won a fifth term with sixty-five per cent of the vote, and today is a popular representative with a seemingly safe district; but Adelson has continued to try to defeat her.

Bruck’s great story tells us of Adelson’s acquaintance with a certain Tom DeLay, Adelson’s lawsuit against writer John L. Smith who wrote a book about Las Vegas casino moguls and (in Adelson’s view) defamed him in the process, and Adelson’s affliction of peripheral neuropathy.

And regarding a certain (former) Repug presidential candidate…

In late March, Senator John McCain held a fund-raiser in Las Vegas. When the event was being planned, McCain called MGM Mirage’s Terry Lanni—who has been a strong supporter of McCain for twenty years, including during his 2000 run for the Presidency—and asked him to co-host the event with Adelson, at the Venetian. Lanni agreed to the favor. A third co-host was the Republican consultant Sig Rogich, another longtime McCain supporter, who has also worked for Adelson. Rogich told me that although Adelson had been an ardent backer of Rudy Giuliani, once McCain became the presumptive nominee Adelson said he would support him. Rogich said that McCain had been “cementing his relationship with Adelson further,” and added, “All I’ve tried to do is make sure the two communicate well, and that he understands the passion John McCain has for the issues that are so important to Sheldon Adelson—first and foremost, Israel.”

And apparently, Adelson likes to claim that “I never climbed up on…anybody’s broken back” on his way to untold wealth and influence.

Given that he has supported Freedom’s Watch so heavily and has a large measure of responsibility for images such as the one above, I don’t know if that claim is partisan stupidity or willful ignorance, or both.

At least losing a good chunk of his wealth would represent perhaps the only penance he will ever understand.